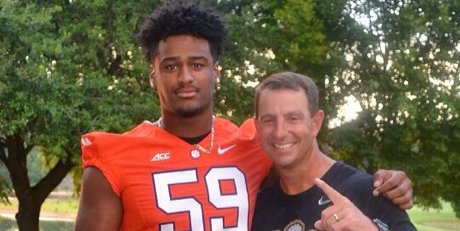 Jordan Williams has known where his future home would be for about six weeks, and he picked Clemson because it’s the total package.

The 4-star 2017 defensive end prospect out of Virginia Beach (VA) Frank Cox became the 12th commitment for the 2017 recruiting cycle for the Tigers when he gave his verbal during a ceremony at his school. Williams will likely be Clemson’s last defensive end for this cycle.

Williams listed a final four of Clemson, Virginia, Virginia Tech and Tennessee in early July, but it was his last visit to Clemson that helped him make up his mind.

“Clemson, that last visit was really for academics and stuff because I already knew what to expect football-wise with the success that Coach (Marion) Hobby has had with defensive ends,” Williams said. “I know that I'm going to be playing in a great scheme and getting coached up by Coach Venables. I know I'm going to be coached by Coach Venables, Coach (Dabo) Swinney, Coach Hobby and Coach (Dan) Brooks. I knew it was going to be a great fit for me. Being able to see the academics and see the last little bit that I was waiting on was definitely huge for me. Honestly, I just feel like Clemson was the total package for me for everything. They weren't lacking in any aspect or anything. It's a great fit for me and my family.”

Williams said he’s known who he would choose for over a month.

“Honestly, I've been a silent commit for a month and a half and that's what a lot of people didn't know about this whole process,” he said. “I called Coach (Brent) Venables one day when I got home from school and I was like, 'Guys, this is where I want to play football. This is where I want to go, but I told Virginia that I would come back down and visit one more time and I told Tennessee that I would definitely try to make one more visit.' I went to UVA and my feelings didn't change, so I told Coach V while I was at The Opening that I was shutting down all of my visits. I was with Tee (Higgins) Matt (Bockhorst), Amari (Rodgers) and Hunter (Johnson) and was on FaceTime with Coach Swinney and I told him, 'Coach, I'm ready to be a Tiger. I'm shutting down all of my visits.' He was fired up about. He just wanted to wait until the All In Cookout to make it official. I looked him in his eyes, shook his hand and told him I was going to be a Tiger.

Clemson’s track record of putting defensive ends in the NFL played a part in his decision.

“It kind of did, but I didn't commit there because of it,” Williams said. “All of the four schools have put great defensive ends in the NFL, but Coach Hobby's background does speak for itself. The recent years with Vic Beasley, Shaq Lawson, Kevin Dodd, it does have a huge impact, but it's part of the full package I was talking about. Just knowing that I'm going to be coached by one of the best defensive ends and defensive line coaches in the country."

Clemson stature in academics also played a major role in his decision.

“I'm huge on academics and it's a huge priority for my family and me and that also played a part in my decision," he said. "It used to be that I couldn't play sports if my grades weren't right. Academics was a huge part of my decision.”

Williams said he’s joining a program on the rise and will be back for a visit sooner rather than later.

The 6-5, 245-pounder had 39 tackles, 13 tackles for loss, five sacks, two interceptions, seven pass deflections, a forced fumble and recovered two fumbles including one returned for a touchdown.

We're not done yet!!! @ClemsonFB