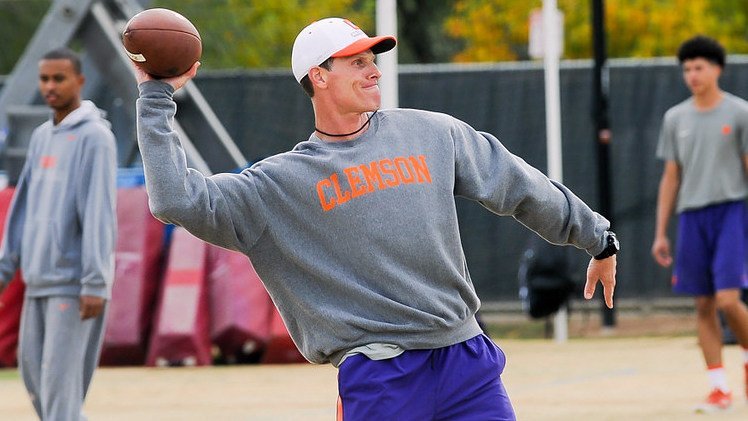 Jimmy Greenbeans works out before the game against Ohio St.

CHARLOTTE, NC – Thanks to Clelin Ferrell, the legend of Jimmy Greenbeans continues to grow.

Jimmy Greenbeans is the alter ego of Clemson defensive coordinator Brent Venables. A few years ago Venables, not liking the way the scout team quarterback was running the offense against his defense, jumped in at quarterback and ran the vaunted Georgia Tech option attack and a legend was born.

Over the next few seasons, Venables didn’t shy away from playing quarterback and the stories will forever be a part of Clemson lore. An incident a few years ago – when Venables had his nose busted by Christian Wilkins and Clelin Ferrell – was brought up at the ACC Kickoff in Charlotte last week by Ferrell.

Ferrell was asked if he had one moment that comes to mind when Venables’ anger was directed his way.

“When I was a freshman, he cussed me out a lot," Ferrell said to a round of laughter from the assembled media. "But you know he loves to run scout team quarterback as Jimmy Greenbeans. He doesn't wear any pads or a helmet, and we are out there going full speed. It was the year we won the National Championship and we were having a bad practice. A really bad practice. I think we were preparing for Ohio St., and he was mad at us, cussing us out and dogging us, saying, 'Y'all don't wanna win' and stuff like that.”

The members of the defensive line took the insults to heart.

“We get to the next period of scout, and he is back there, and everybody on the d-line is mad. All I remember is making an inside move. Christian (Wilkins) comes outside and we straight pancake him,” Ferrell said. “Knock him on the ground. He got up and we thought his nose was broken because it was bleeding. We asked him if he was good, and he said yes. He still ran the scout team the rest of the day. He came in the next day and had a welt on his side and had bruises on his legs. He was mad the rest of the week from that but it turned out good because we won the game. I guess it worked.”

The gash on Venables’ nose was noticeable during bowl preparation two years ago.

“He (Venables) is always putting the blame on me for stuff like that, but it wasn't even my fault,” Wilkins said. “It was all Clelin Ferrell. Clelin was coming off the edge, and I was coming off the other edge in practice, and Coach V got in the way. Cle couldn't stop his momentum, so he pushed Coach V into me, and I tried to move out of the way, but it was already too late. Coach V was already going down, and he hit his face on me on the way, and that's how he got the gash.

“He had blood dripping down his face and he was still taking snaps. He was pretty quiet after that. I don't think he's ever been hit like that in a practice. He was a little quiet. We always give him a little rough up but nothing ever that bad. It was pretty funny. The whole time, I was like, 'Oh man, he's still doing it.' He was still just as intense and didn't take a break or anything. It was just funny.”

“It was funny. I saw him, and I was like, 'What happened to your nose?' Then after the game, he was wearing a cast on his wrist,” Boulware said. “He almost fainted or had a stroke on the field from getting too excited. We showed it to him and he didn't know it was blowing up on social media. He's just an intense guy. He wants the best out of us and he will do anything in his power to get that, whether it's breaking his nose or busting his nose open or breaking his wrist or having a heart attack on the field. He's going to exhaust every amount of energy he has into this program and into this defense to play at a high level. I think those are pure examples of his intensity.”