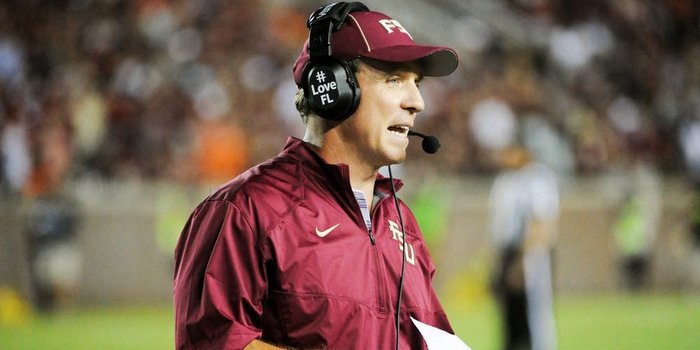 Florida St. head coach Jimbo Fisher knows his Seminole football team has a big challenge in front of it Saturday night, but he also knows they have a great opportunity.

Third-ranked Clemson travels to 12th-ranked Florida St. for an 8:22 p.m. kickoff in Doak Campbell Stadium Saturday night, and while Florida St. is out of the running for an ACC title, Fisher knows a win could keep the ‘Noles in the running for a spot in the College Football Playoff.

“Clemson is a heck of a football team. We've played well the last few weeks and got a great opportunity in front of us, another big ACC matchup, great for our conference, great for our league, great for both teams. Two of the winningest teams in the country in quite a while, and Dabo and those guys do a great job,” Fisher said earlier this week. “Defensively they're playing outstanding. Offensively got a dynamic quarterback. Playmakers outside, the backs. Like I said, on defense, up front, they're dominant up front. Secondary is good, backers run around and make plays. They're sound everywhere. They're on a great run and playing very well, and again, got a heck of a challenge but also a great opportunity.

“Anything can happen. If you can figure out college football right now, tell me. I mean, you're not going to. We're in a crazy time right now. You don't know what's going to happen (make the playoff). But no, I don't see that. I could see it happening, I could see it not happening. It wouldn't surprise me a lick. LSU the first year after I left, they lost one of them, and didn't they lose the last game of the season to Arkansas? I mean, and they still got in and won a National Championship, so that can happen there, I'm sure it could happen in the playoffs, and you've still got a lot of -- isn't there a lot of matchups still left to play in there somewhere? I mean, it could happen.”

Fisher said he likes what Brent Venables has done with the Clemson defense.

“First of all, gets good players. Go look at the draft picks of the defensive guys,” Fisher said. “If you want to be a great offensive team, defensive team, I say it all the time, you've got to get good players, and they've had good front guys. They're very multiple. They pressure you. They'll put a lot of pressure on you, force you to execute and make plays. There's no gimmes.

“What I'm saying, there's no lay-ups and things you can just -- you'll have a chance to get, and they make you execute and play tight coverage in the secondary. Try to make a solid catch. They on occasion will give up a play or two like happened to them in the Alabama game or busted coverage or something. They're very multiple, extremely multiple in what they do. Do lots of things, lots of coverages, lots of different -- a multiplicity of things which they do, and as I say, sometimes it will get them in trouble, but most of the time they execute the heck out of it. They do a great job, and they've got good front people and they blitz you and give you different looks. I mean, they do a real sound job and got good players and play hard.”

Clemson quarterback Deshaun Watson saw his first extended action as a collegian when the Tigers played at No. 1 Florida St. two years ago, and Fisher said Watson has only gotten better.

“Oh, he's as good as anybody. I mean, you watch the consistency he plays with, he throws the deep ball, the short ball, can run. But to me, his competitiveness, too,” Fisher said. “He's a great competitor and always finds ways to make the plays, know what I'm saying? He needs to be one of those guys. That's just a characteristic that you either have it or you don't, know what I'm saying? And he does it. He's a very, very special player, he really is.”

On the importance of Wayne Gallman

“It does, and the physicality, him being physical and getting in there and making him a two-headed monster. They can run it inside with power and play without -- and then throw the screen games and all the stuff they do and then put him on the edge on the runs, and when you fake it to Gallman you've got to respect him so much. It makes a big difference, it really does.”

What he’s seen from Mike Williams

“He's covered but he's never covered. You back shoulder and you throw it high, the body, the range, the catch radius, all those types of things, then he's got great athleticism and speed, and they utilize him on the backside a lot and in single coverages a lot. He's a really good player.”

Anything you can take from last year’s game?

“No doubt. I mean, they'll study them in there, too, but at least you know you can do it, know what I'm saying, and you've got the capabilities. But at the same time, the field position was huge in that game. One of the things in that that we did, even though offensively we didn't score much, we moved the football very well, had leads early, had chances to take leads, but we would move the football even to midfield, and they would punt and they would start -- if you go back in that game, they started -- they would have two or three 1st downs and pick it up for a 1st down but then they would be at midfield. If you remember, each team kept starting way back, and to be able to move the football I think offensively really helped us in that regard, too, so they didn't play on many short fields.

“But if you play these guys on short fields, they become very tough, know what I mean? But defensively we had some success, but they still had a lot of yards and eventually made some plays, but we played them pretty well, as well as anybody did I guess you could say.”

On why teams, including Clemson, might not be as sharp the year after playing for a title

“Carolina Panthers, you name it. Because people are going to study you. You're successful. People mark you. You're earmarked, then it becomes distractions or as I say clutter. All of a sudden you're doing this interview, you're doing that interview, you're on SportsCenter, everybody in the world, you're a hero, you're a this, and don't think all those things off the field don't turn into clutter for these guys. It takes focus away from their main job. When they were nobody and no one knew who they were and they were playing their tails off, it's fun. Now all of a sudden -- and you don't want to disappoint. I don't want to be arrogant and not go do this. People ask you to do things. People do this. Teams study you in the off-season. Teams get your tendencies.

“I mean, it's just a whole gamut of things, and it's human nature, and sometimes the main thing is the main thing, but not as much as it used to be. I mean, distractions that come from teams that have success or maybe -- that's why I say Alabama, what they're doing right now is really tough to do. There's not many people doing it. There's not many people do it in the NFL. I think the Patriots, what they do is really amazing. I think when you have -- your sole focus and you're driven, I think that's where infrastructure really comes in, and I think the Patriots tremendously understand it.

“You go watch some pro football, why the same teams, there's an infrastructure guy. Just like in college football, the infrastructure I talk about, your off-field people, all the things that go on, the things you have in place are as critical in today's time probably more than they've ever been in the history of sports, and the people who can afford to do with the infrastructures off the field and eliminate clutter and keep those things relegated to a certain amount of time and things that can help keep focused and keep developing and player development and all those things are extremely critical. Most people don't have the tools to do it.”

Senior lineman after season-ending injury: "I am forever a Tiger"

Clemson drops out of all rankings for first time since 2014