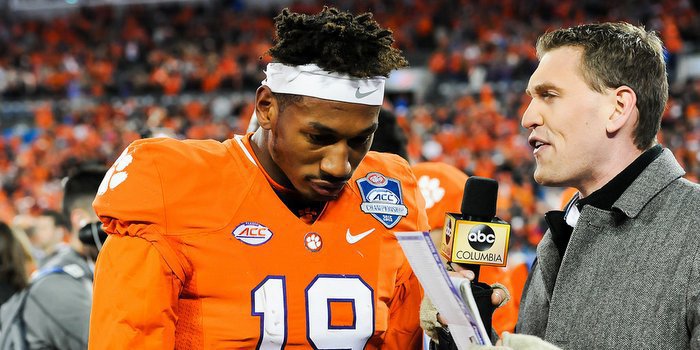 As Saturday afternoon turned into early evening, Charone Peake began to think that he might not hear his name called in the 2016 NFL Draft and he began to mull over free agent possibilities. Then his phone rang, and everything changed.

The former Clemson wide receiver was drafted No. 241 overall by the New York Jets during the seventh round of the draft Saturday, and after his name was called there were just 12 more names to be called. It was cutting it close, but Peake was thrilled when he got the phone call.

“It was crazy. It had gotten pretty close to the end, and I was at the point where I was trying to figure out what was the best situation for me as a free agent,” Peake told TigerNet. “I was just trying to prepare myself in case I wasn't drafted. When they called, I thought it was a great situation that the Jets wanted to draft me.”

Peake said he kept his phone charged all day, and that his grandmother caused a commotion a few times when she called.

“My phone stayed on the charger, and I had it turned up loud,” he said. “My grandma called a couple of times and had my heart beating fast. It's all good, though.”

He had 50 receptions for 716 yards and five touchdowns this past season. For his collegiate career, he had 99 catches for 1172 yards and ten scores. However, he battled injuries and wondered if teams would shy away. The Jets didn’t.

“I saw the phone ring and it was a New Jersey area code, so I figured it was either the Jets or the Giants,” Peake said. “They told me they were looking to pick me with the next pick, and I was pretty excited. I went from trying to figure out a free agent situation to getting drafted by the Jets. It was exciting.”

The Jets have two solid starters at wide receiver in Eric Decker and Brandon Marshall, and Peake said he can’t wait to learn from Marshall.

“Those are guys that I have been watching since I've been playing ball. Especially Brandon Marshall,” he said. “His style is what got him to the NFL, and he is one of those strong receivers, and he has a lot of intensity. He's a guy I've watched and kind of modeled myself after. It will be great to actually play beside him. We have a lot of similarities, and he's a guy I've always looked up to. I am always watching his film and watching his games to see if there is something I can take from it to get myself better.”

Two more Clemson players went off the board after Peake’s selection – running back Zac Brooks and safety Jayron Kearse – giving the Tigers nine total draft picks. Peake said he was proud to be a part of that group.

“I am definitely proud, getting to see a lot of my best friends get drafted,” he said. “After I got drafted there were a couple of more guys with Jayron and Zac. I was proud to see them get off the board. I am happy for all of those guys and they deserve it.”

Now, he gets the chance to live out his childhood dream.

“It has sunk in a little bit, but not all the way. I am really looking forward to it,” Peake said. “It's a dream come true, honestly. This is something I've wanted since I can remember, and now I get a chance to do it.”