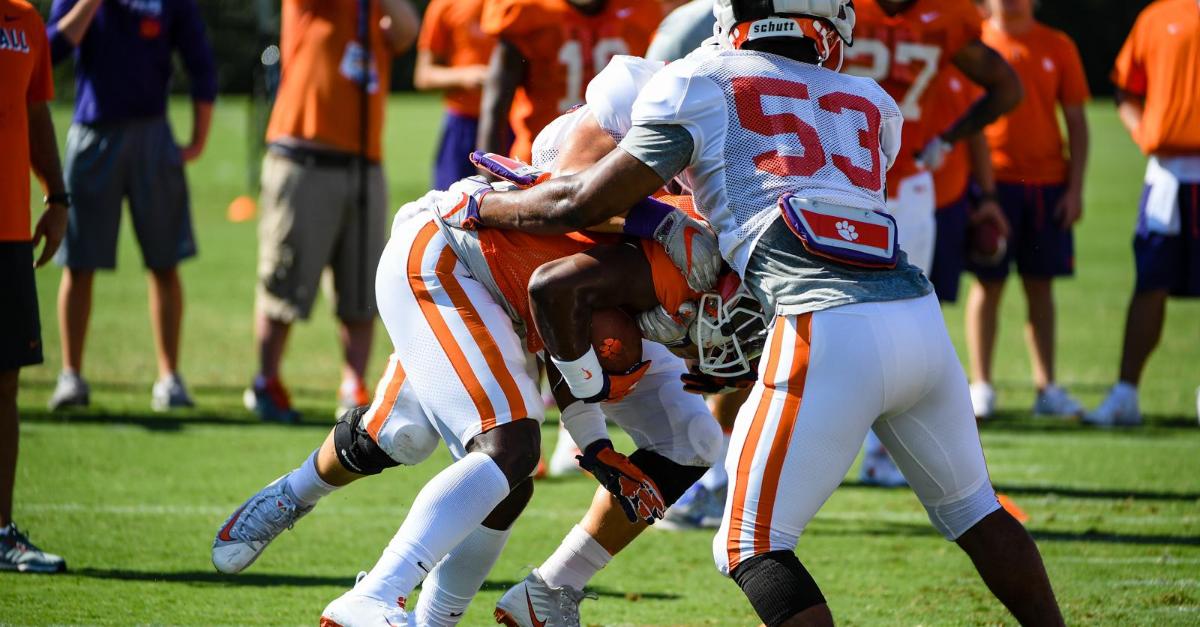 The Tigers will start game prep this week

CLEMSON – It’s hard to get a day off during fall camp, even when it’s your birthday.

Clemson wide receiver Will Swinney and offensive lineman John Simpson celebrated birthdays Monday, but still had to go through a two-plus hour practice at Jervey Meadows, and head coach Dabo Swinney said that Will (his son) had his best practice as a Tiger.

The team will spend the afternoon on Lake Keowee as part of its annual lake day and then finish fall camp with a practice Tuesday. The Tigers had the weekend off after a grueling camp.

“Today was what I hoped. It's getting kind of hot. It was good for them to have a few days to rest and recover, refuel and recharge,” Swinney said. “We've been going 17 straight days with no break, so it was a good couple of days for everybody, staff too, to just kind of disengage for about 36 hours. We got back at it this morning. We've got a bunch of guys that are dinged up, still practicing but I can tell their bodies are at a point that we've got to start getting them back. Tomorrow will be mostly game prep. Today was a combination of Clemson and some game prep. We had some good on good.

“We got several guys back into practice that have been out - DK (Derion Kendrick), Jake Venables, Baylon Spector. It was good to see them out here. Tomorrow will be all prep and then Wednesday we start school. It's winding down. We're going to go play on the lake this afternoon. It's one of our team-building exercises that we do every year and we appreciate all of the folks up at The Reserve who come together to help us have a great day. A lot of food and a lot of fun. We have 39 new guys - guys who will get their first opportunity to see the beauty of this area and have some fun on the lake.”

Swinney said it was a plus to get some of the injured players back to practice.

“We had two or three different types of injuries that have held guys out for short times. Some guys have been out for longer than others,” Swinney said. “To get DK, Jake, and Baylon back today was big. Those were the hamstring guys. They moved around well. Justin (Foster) was out a couple of days but he was back. Blake Vinson was back. We got a lot of guys back but we still have a lot of sore bodies right now. We're playing in 10 days so we'll start turning the page fully to getting game ready and getting our bodies ready to go play and getting some spring back in them.”

The coaching staff made some redshirt decisions this weekend, but with the new NCAA rule that allows a player to play in four games and still redshirt, Swinney declined to name names.

“Everybody is going to play. We have four games to play with,” he said. “We have a few guys that are for sure that these guys we're definitely going to hold. We've got several who are on the bubble and that right now let's play four games and make a decision from there. Then we have some guys that we know are going to play.”

Swinney said that that he has been pleased with Nyles Pinckney during camp, and then said Jordan Williams might be as talented as any player in the defensive tackle rotation. Swinney also said that freshman Tyler Davis might be as good as they’ve got.

I asked Swinney if Sheridan Jones had made a move with the absence of Kendrick, and he said that both Jones and Mario Goodrich are pushing for a spot. Swinney said that they are trying to make their corners learn both sides of the field and that Goodrich can play boundary or field corner. Swinney then said freshman Andrew Booth is coming on.