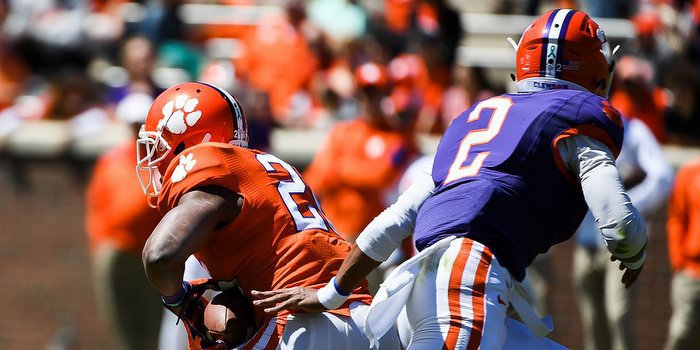 CLEMSON – Open starting spots are almost nonexistent for Clemson’s offense during fall camp, so co-offensive coordinators Jeff Scott and Tony Elliott are making sure the starters get their required work while also keeping an eye on who will man those second-team spots.

Saturday’s scrimmage and the one the Tigers will hold next Thursday will go a long way towards deciding those spots.

“For us, the biggest thing is judging their progress from the first scrimmage to the second scrimmage. I thought we improved in a lot of areas; the running backs ran very well, and we had several long runs,” Scott told the media after the scrimmage. “It starts with the offensive line blocking hard, and it was good to see some breakaway touchdowns today. We also had some explosive plays in the passing game. There was a mixture of guys - Deon Cain, Artavis Scott and Ray-Ray McCloud had one. We got off to a fast start, which is something we always preach.

“That first team offense went 70 yards down the field on the first drive and put it in the end zone and got the momentum going for the day. We have some things we need to clean up - penalties and communication between the center and the quarterbacks, but we are playing a lot of guys. But overall, I was pleased, but we still have a lot to clean up before we have to get ready for Auburn.”

“I think today reshuffled it a little bit. Every day the depth chart kind of moves because there are so many guys that are very close. But right off the bat, it seemed like Adam Choice had a really good day and separated himself a little bit from some of the others. Even though it was a scrimmage, it was just another evaluation opportunity. Every day another guy stands out, and it's truly a situation where those guys behind Wayne have their days and today was a good day for Adam.”

“There are high expectations for him. He was a highly recruited guy coming out of high school, and this is the time of year when you challenge those guys. But when they have the ball in their hands, there isn't a whole lot to learn about that - you just run fast. He has done some good things and had some good days. All of the freshmen have had their moments, but this install is pretty heavy, and it kind of slows them down a little bit. That is something we will be challenging him with over the next couple of weeks.”

Nick Schuessler has had probably had the best fall camp up to this point, but it was good to see in the scrimmage opportunity that Kelly Bryant did very well. He had a touchdown pass down the field today and threw it right where it needed to be. I don't think it's gotten to the point we are ready to name a second team quarterback, but we've seen improvements in both of those guys. We have confidence in both Nick and Kelly at this point and these next two or three weeks would decide who that guy would be if we needed somebody else to run out there.”

“The first six of Mike Williams, Hunter Renfrow, Artavis Scott, Deon Cain, Trevion Thompson and Ray-Ray McCloud, there is no doubt they have separated themselves from the three freshmen as you would imagine. The three freshmen have had their moments but I think the install is getting to them a little bit and they are slowing down in a hurry right now. They didn't have a very good day today, just from knowing where to line up and basic things. Those six have separated themselves and I am not disappointed in any of them. We are cross-training some guys to be able to play some different spots, which is something those guys want to do. We will have different rotations and game plans based off of who we are playing and how those guys are doing.”

“I think we are probably a week away from that. We have another scrimmage next Thursday and then after that the next week will start game-planning and putting our focus on Auburn, Those discussions are going on and all of these scrimmages and everything counts, but I don't think there will be any firm conversations or decisions about that until we get to the next week. I would like to play all of the guys that deserve to play. We love to play freshmen, and if they have earned the right to play they will play. It has to do with depth and how they are doing.”