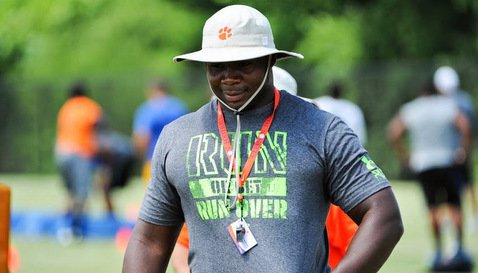 Jarrett will join Beasley and Goodman in Atlanta.

Grady Jarrett
Defensive Tackle (2011 - 2014)
#50 6-0, 290
Conyers, GA
View Full Profile and his family, but Jarrett says that being drafted by the Atlanta Falcons early Saturday afternoon picked up his family’s spirts.

Jarrett and about 50 family members were in the family’s home in Conyers, Ga., watching the second and third round of the NFL Draft when someone smelled smoke they thought was coming from the kitchen. As it turned out, the house was on fire and the family escaped the burning building in what Jarrett described as a scary scene.

“It's hard. We were watching the draft and smelled something funny,” Jarrett told TigerNet Saturday afternoon. “We thought it was in the kitchen but it ended up being in the upstairs game room. We don't know exactly what started it, but they still have to do the investigation. It was a scary scene. We got everybody out of the house and just watched my house burn. It was really, really tough. We couldn't do anything. We just had to wait for the fire department to get there. They got there and it took them a good minute to get the fire completely out. It's really bad damage but we'll be okay.”

Jarrett lost most if not all of his Clemson memorabilia (and most of his personal clothing), but with the draft still in progress the family continued to watch the draft at a cousin’s house in Covington, a 15-minute drive away. Jarrett’s name wasn’t called on Friday night, but he was drafted early Saturday by the Atlanta Falcons who picked Jarrett with the first pick of the fifth round.

“We continued to watch the draft - rounds two and three - and I thought was going somewhere in that range and my name didn't get called, so that just added a little more stress to the day,” Jarrett said. “With Atlanta taking me today, it just lifted my spirits and my family's spirits. It was really special. It actually helped lift my family's spirits a whole lot with me going to Atlanta, even though it was later that I thought it would be. I'm just happy to have the opportunity. It's definitely a weight lifted off of my shoulders.”

Jarrett is a perfect fit for new Falcons head coach Dan Quinn’s defense, and he will be reunited with former Clemson teammates Vic Beasley

“It's a perfect fit for me and I couldn't ask for anything more,” Jarrett said. “It's going to be special to reunite with my teammates. I'm going to feel right at home.”

Jarrett finished the interview by saying the home can be replaced and that he is just happy no one was hurt in the blaze.

“We should be good. We've got really good insurance so they will put us up somewhere for a little while,” Jarrett said. “We've just got to get my house fixed. We are just glad that everybody is safe.”

Yesterday: DT Grady Jarrett's possessions were destroyed in a fire.

Today: He was drafted. By his dad's old team. pic.twitter.com/HFgF2AwNjt