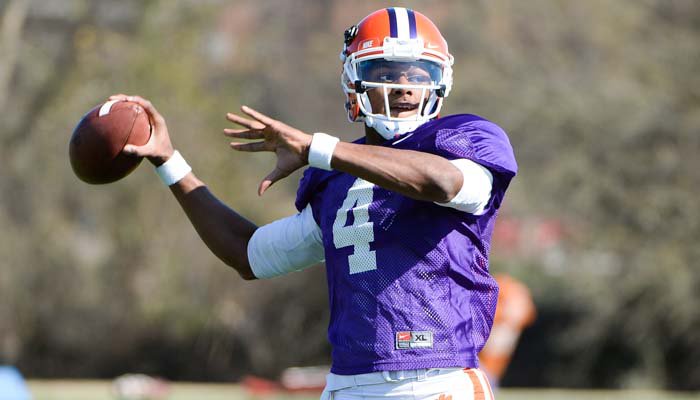 Chad Morris has said that Watson will play this season

GREENSBORO, NC – An unusually large crowd of media surrounded Florida St. quarterback Jameis Winston during an interview session Sunday afternoon, and it gave TigerNet a chance to ask the Heisman Trophy quarterback about how he handled the pressure of playing for a high-profile program and what advice he would give Clemson freshman Deshaun Watson

Winston, sitting at a table at the ACC Kickoff at the Grandover Resort, started off the session by stating that an ACC team “took the national championship from the SEC” and prompted media to applaud the ACC for bringing in a National Champion.

He’s brash and has run into trouble off the field a few times, but he also authored the greatest freshman season by a quarterback in college football history, leading Florida State to a 14-0 record and the 2013 VIZIO BCS National Championship. He was named Offensive MVP of the national championship game by throwing for 237 yards and two touchdowns in a 34-31 come-from-behind victory over No. 2 Auburn at the Rose Bowl in Pasadena, Calif.

Winston did all of that as a redshirt freshman, while Watson will play this season as a true freshman. I asked Winston what advice he would give Clemson’s young signal caller, and he said that he knows all about the Gainesville, Ga., native.

“Well, he has to get on the field first,” Winston said. “I’ve seen him play, and I think he is an outstanding player. But I think the main thing is influence. As a young quarterback you have to earn that respect and you have to earn that trust, and that’s one thing that Florida St. did – they allowed me to come in and take the position. I had the privilege of sitting behind E.J. (Manuel) for a year before I stepped into the fire. He (Watson) will probably get thrown into the ring early.”

Chad Morris
Offensive Coordinator / QBs
View Full Profile said last week that Watson is likely to play in Clemson’s season opener at Georgia, and Winston said it takes a leader to get his team ready to play and win in a hostile environment, and he referenced Florida St.’s 51-14 win in Death Valley last season.

“That is one thing I can compliment myself on,” he said. “I got the guys fired up in the locker room and let them know we are better than them. All of the hype that everyone gets before the game – people focus on the crowd and the focus on the television and all of that stuff. But when it comes down to those two teams between the white lines, it comes down to who wants it more. We knew that we wanted it. Clemson had a great team and we knew we were the underdog and we loved it. It gave us the motivation we needed.”

Winston then said that he wishes Watson the best of luck, but that a 5-star rating in high school won’t mean anything on the collegiate level.

“I wish him the best of luck. I have seen his game and I respect his game, but it’s about Florida St. man,” he said. “I guarantee you that (defensive back) P.J Williams and the defense aren’t worried about a 5-star. In college football, you don’t worry about stars, you worry about wins and championships. “