Lighting and fast-moving thunderstorms delayed the start of the session for almost an hour, and much of it was spent under cloudy skies and scattered raindrops, but once things got going things happened quickly.

Most of the big names will work out Wednesday morning, but we have some notes and nuggets to pass along.

Five-star offensive lineman Jamaree Salyer was in the house, and he got a ride to Clemson’s indoor practice facility with recruiting operations coordinator Tyler Clements. Once inside, Salyer was met by head coach Dabo Swinney, who spent a few minutes talking to Salyer and his coach.

During drills, Swinney spent a good portion of three different periods on Salyer’s side of the field, and along with Clements and Thad Turnipseed (director of recruiting and external affairs).

We watched Salyer for several minutes, and we could only write what you already know – he’s the real deal. He has size, quickness and strength and a great base.

The visit is the first for Salyer to the Clemson campus since March 10th, when he watched a spring practice with Cartersville (GA) 5-star quarterback commit Trevor Lawrence. 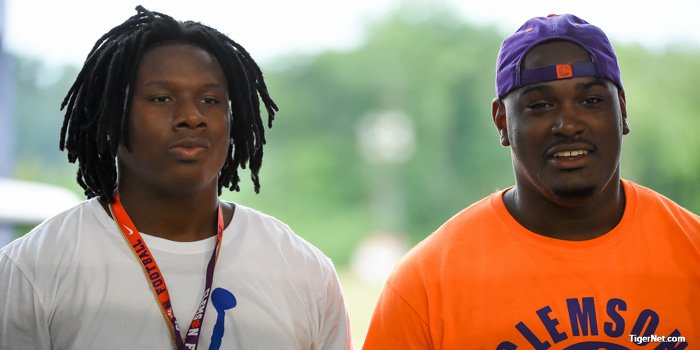 Clemson, Georgia and Stanford are thought to be the frontrunners for Salyer, but one little birdie told me that it’s really a two-team race between the Tigers and Bulldogs.

*2019 Oxford (AL) 4-star center Clay Webb was also in attendance. Webb already owns offers from Alabama, Auburn, Florida and Georgia and at 6-3, 285, he’s already got the size to be a D1 offensive lineman. He moves well for his size and I’ve liked Webb since I saw him at The Opening Regional in Atlanta last year competing against guys like 2016 prospects Robert Beal and Malik Herring.

*Clemson’s newest commit, Darnell Jefferies, was putting the full-court press on 2019 Fort Myers (FL) South Fort Myers defensive end Quashon Fuller, who showed up to see what Clemson has to offer. Fuller is a Florida State commit but spent most of the day on campus. Jefferies and Fuller spent time with Clemson commit Justin Mascoll, and the trio spent time wandering the practice fields.

They spent a good deal of their time watching offensive linemen and telling their own war stories.

*The coach quote of the night belongs to Tony Elliott, who was working with the running backs and got frustrated when so many were wanting to jump and cut and leave their feet during drills.

Elliott said, “If I am a running back, I make my living with my feet on the ground, not in the air.”