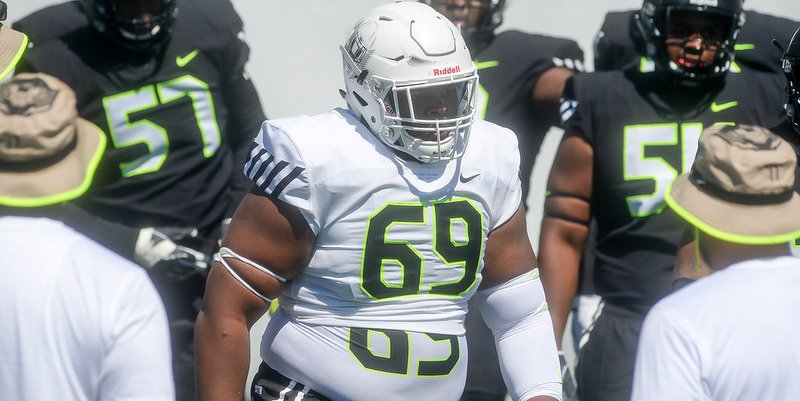 Salyer works out at The Opening earlier this week

The Atlanta (GA) Pace Academy standout was chosen as one of the five standout offensive linemen at Nike’s The Opening at Nike World Headquarters earlier this week, and Salyer showed why he’s considered by many to be the best offensive guard in the 2018 recruiting class.

The trip to Oregon is part of a busy summer for one of Clemson’s top targets, a summer that included a June visit to head coach Dabo Swinney’s high school camp. While on campus, Salyer got to work with offensive line coach Robbie Caldwell.

“I just kind of got to see some things that I already knew about on campus. I got a chance to work with Coach Caldwell at the camp. I had a good time,” Salyer told TigerNet. “He (Caldwell) just tells me that at Clemson they have a four-year plan. He believes that he can develop and that I can be an instant impact on the team.”

Salyer’s footwork at both Swinney’s camp and the camp in Oregon show why he’s a 5-star, but he doesn’t listen to the outside talk or when people tell him he will be a day-one starter when he arrives on a college campus.

“I guess it just kind of came when I started working with my o-line coach at Pace Academy. I didn't always know I had feet like that,” Salyer said. “When we started really working on my craft and perfecting my technique, it just kind of came. No, because I know no matter where you go to school you have to work. Anybody can tell you that and it's a good sell, but when you step on campus you've got the older guys looking at you like, 'Now, what are you going to do?' You have to work.”

He does think he would be a good fit in Clemson’s offense.

“I think so. I've seen a lot of videos of them even with their small guys off the ball,” he said. “That's my type of game. I like that they spread the ball out and pass it. I feel like I can protect the quarterback. Just doing those things and knowing that I'm able to do it, I feel like I can fit into their offense.”

The recruiting services have long mentioned that Salyer has a final two of Clemson and Georgia, but he wanted to set the record straight.

“I don't entirely agree. I feel like I have more of a top six,” Salyer said. “I would say that's Georgia, Clemson, Ohio State, Stanford, Florida and Notre Dame.”

What’s one thing that stands out about Clemson?

“Just that they're a family. I know Coach Swinney says all of the time that Clemson is a family and the people make Clemson,” he said. “I believe that to be true and as many times as I've gone, I feel that vibe coming from the place. I got to hang around the guys and they all seem like pretty cool guys. Those things alone kind of put them at the top of my list.”

The difference between Clemson and Georgia is that Clemson is a proven winner, while Georgia is building towards that.

“I would probably say that with Clemson, I believe they're a genuine place,” Salyer said. “They have great people there. They have the ability to win a national championship, and who doesn't like that? With Georgia, it's the relationship with o-line coach (Sam) Pittman and head coach (Kirby) Smart. They look like they're building something and they signed a huge class last year, so there's a thought they're developing something there.”