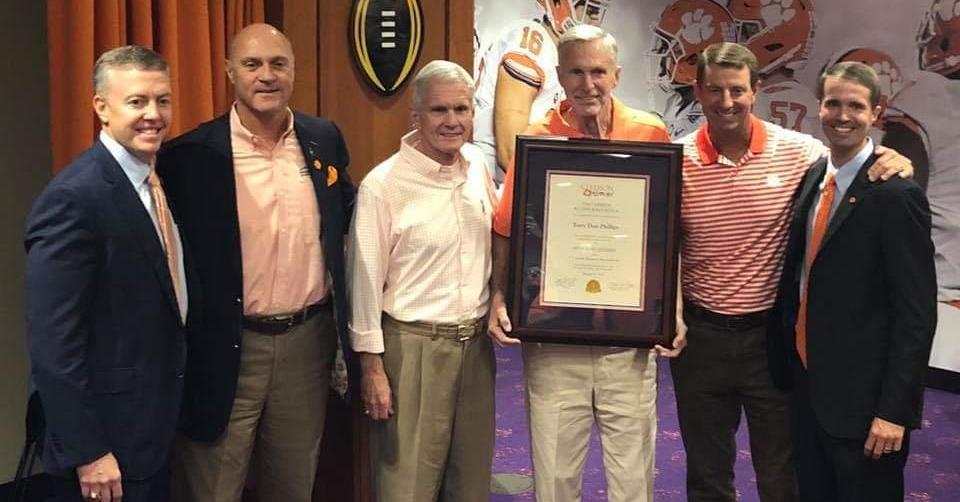 CLEMSON – Terry Don Phillips thinks that Clemson is a special place, and that’s why he teared up when he was surprised Thursday evening with an honorary degree from Clemson.

Phillips, a graduate of Arkansas, was Clemson’s Athletic Director from 2002-2012 and oversaw several large projects during his tenure, including the West End Zone. However, he might be best remembered for taking a chance on a little-known wide receivers coach named Dabo Swinney to lead the football program after Tommy Bowden and the school parted ways in 2008.

Thursday, Swinney was part of a group that presented Phillips with a plaque after football practice.

“None of us would be here if it wasn't for Terry Don. He was a great AD here, and he was the one that gave me the opportunity as the interim and then he hired me and gave me the opportunity to lead the program,” Swinney said. “He really believed in me from the beginning. I am so appreciative of him and all that he has meant to me personally but also to Clemson University and certainly Clemson athletics.

“We had the neat privilege of being in on the preparations of honoring him as an honorary alumnus. We presented him with a big plaque and he has all rights and privileges of a Clemson alum. It was a special moment. This was an opportunity to celebrate him and love on him a little bit and give him the recognition he certainly deserves.”

Phillips told TigerNet he had no idea the surprise was coming. He was out running errands with his wife Trish told him they needed to stop at the football facility so she could check on some football tickets. The couple was ushered into the football team room, where Swinney, Athletic Director Dan Radakovich, former President Jim Barker, and others were waiting.

“I had no earthly idea. I was totally surprised and really didn't know how to react,” Phillips told TigerNet. “We got there and I ended up in conversation because I just really went along for the ride and then all of a sudden folks started coming in. First, I visited with Dabo and we talked about how the season was going and how practice was going. We were just having conversations. The next thing I know, Dabo was taking me down into the team room.

“I was just enjoying it and I had no idea what was coming. We walk in the room and everybody was just sitting in there - President Clements, President Barker and several other people. I really hadn't absorbed it all yet. My mind was wandering off about yard work and things I needed to do.”

Clements told TigerNet that Phillips is "a Clemson guy."

"One thing that any leader knows is that in any of your successes, there are people that came before you that helped to get you where you are," Clements said. "This university has had decades and decades and decades of building up to where we are, and Terry Don played a key role to get us to this point. He did some really special things and I was happy for him. I am really happy that he got recognized - he is a Clemson guy and he a lot for the institution that still stands today. It was a special ceremony."

What does the honor mean to Phillips?

“It just means so much. The people have been wonderful to Trish and I since we moved here,” Phillips said. “Clemson is a special place. We really didn't know how special it was until we moved here. We have great friends here. We're both from the Southeast and Midwest so maybe we would move back to where are families are in Arkansas and Missouri, but we love it here. We love the people. President Barker is like family and President Clements is doing a tremendous job.

“We got here and we fell in love with Clemson and with the people. When I retired, we said this is where we want to live. It means a lot to me because Clemson is very special to Trish and I. It's really hard to put into words how we feel about Clemson. Getting this award, I teared up. I didn't know and still don't know what to say other than I'm so appreciative of what occurred yesterday and people taking their time to come over and be a part of it. It's hard to put into words. It's a tremendous honor. Trish and I really very much appreciate it.”