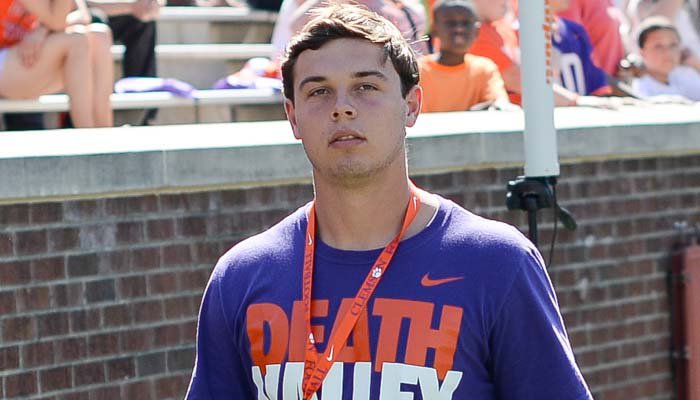 View Full Profile senses an opportunity, one that he hopes to take advantage of.

The Orlando (FL) Lake Nona quarterback committed to Clemson back in February despite the knowledge that Deshaun Watson, Chad Kelly and Nick Schuessler would be ahead of him on the depth chart when he arrived on campus. However, Kelly’s departure from Clemson makes Israel’s opportunity even bigger.

Jeff Scott
Asst. Coach (WR) / Recruiting Coord.
View Full Profile were in Orlando to see Israel on Tuesday and the coaches spent some time discussing Clemson’s quarterback situation with Israel’s coaches, who relayed the information to the four-star prospect.

“With Cole [Stoudt] being a senior, after this next season he will be gone,” Israel told TigerNet Thursday evening. “Deshaun [Watson] will be there as sophomore, I think. Hopefully, he will be a sophomore. I don't know if he will get redshirted or not, but the way I see it, I don't think they will. He's such a great athlete that they will find a way to put him on the field.

“Me and Kelly Bryant

View Full Profile will be there [next year]. I don't know what his plans are as far as enrolling early, but I will be enrolling early. I'll be there in December ready to go. With Chad being gone, I feel like I have a great chance to either be a backup or get red-shirted. I'll also have a great chance to play as a freshman, as well. Being a starter for four years, you never know. You are always one play away from being the starter if you're the backup. That's my look at it, right now.”

Israel has made several trips to Clemson since his commitment, the most recent for the Orange and White game, where he was able to see everything Clemson has to offer on a “game” day.

“I was up there two weeks ago for the spring game,” Israel said. “I really got to get a feel for the game with the atmosphere they had. It wasn't 80-plus, but they had 33 or 35,000. I just got to see some of the plays they run. They kept it vanilla because they have other people trying to pick up some schemes in the spring game to see if they can steal some stuff for the fall season. I got to sit down with Coach Morris for a while and sit in on some meetings. I had a great experience there.”

Since February, the 6-0, 189-pound prospect has picked up offers from Florida, LSU and Ole Miss, among others, and he doesn’t expect other schools to back off anytime soon. However, he remains fully committed to Clemson.

“It's picked up and it hasn't stopped,” he said. “I just have to keep saying thanks, but no thanks and continue to work hard, be humble and be thankful to have this opportunity to have offers from different division one schools. With the spring evaluation period, I've already seen several coaches come by and I'm sure there will be more over these next couple of weeks.”