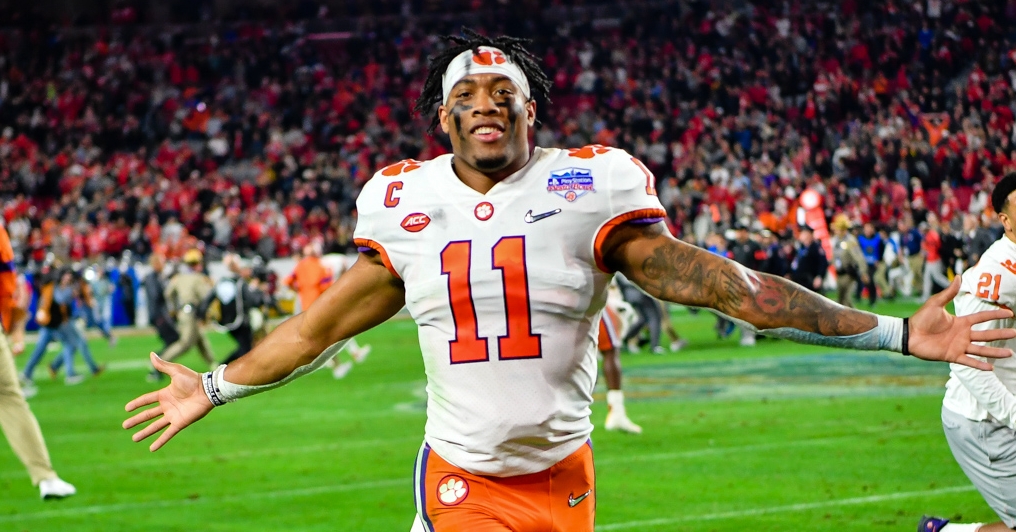 Simmons is ready to start his NFL career.

If the draft had been held in Las Vegas as was planned, Arizona Cardinals General Manager Bruce Keim might have rushed the podium to announce the selection of Clemson’s Isaiah Simmons.

Keim, head coach Kliff Kingsbury, and owner Bill Bidwill were almost giddy in their comments after the Cardinals selected Simmons with the No. 8 overall pick in the first round Thursday night.

Simmons was all over the field for Brent Venables last season. He played safety 218 snaps, slot cornerback 286 snaps, outside linebacker 160 snaps, inside linebacker 120 snaps, perimeter cornerback 17 snaps and rushed the passer 71 times, totaling eight sacks (to go with more than 100 tackles and three interceptions, the first college player with such a trio since Khalil Mack).

"I can be used in a lot of way help the defense in any possible way," Simmons said. "If I need to play safety one week or linebacker one week, rush the passer, I can get all that done. People have their own perspectives on it but I feel it is a strength because it creates so much deception on the defense."

"The only guy I could think of, with similarities, was Brian Urlacher when he came out," Keim said. "He was a safety at New Mexico, for the most part ... not quite as fast, but a guy who became a great player and who made that ascension to playing more in the box. He was the one guy who I'd say, if there was any kind of comp and you could make a projection, it'd be Brian Urlacher."

Simmons had no idea where he would land on draft night.

“I knew it was possible I could end up in Arizona but coming into the draft I had no idea where I was going,” he said. "Now that I know I am beyond excited and can’t wait.”

Clemson was a late – and the best – offer Simmons had coming out of high school in Kansas.

“With all of the offers I had, I always felt like I could do better,” Simmons said. “I had 16 offers, but I felt like I was good enough to play at some of the schools that were the football powerhouses. Clemson ended up coming in and offering me a month before signing day and I went there and visited there and fell in love, and since then it’s been history.”

“Isaiah Simmons is as advertised. The reason he has become so intriguing to so many people is because of his versatility,” Swinney said. “He’s a graduate and he’s incredibly smart from a football standpoint. He played five positions and clearly wanted to execute at different positions for us, which demonstrates his knowledge and his diversity. But he’s a unicorn. You don’t find guys like him that can play safety, that can cover, that can blitz like a defensive end, and that can play linebacker. He’s a great special teams guy. There’s really nothing he can’t do. The biggest thing I can say about Isaiah is if you get 53 men on a roster, he’s like having 56.”

Defensive coordinator Brent Venables said the Cards are getting a tremendous competitor.

“The first thing they’re getting is a tremendous teammate and leader. He’s somebody that’s very committed to his craft, somebody that has as much passion for football and being great as anybody that we’ve been around,” Venables said. “In regards to his playing ability, he’s a tenacious competitor that hates to lose. He’s incredibly gifted, but his best football is still ahead of him. He’s very dynamic in his skillset and has incredible position flexibility. He’s as impactful as a player that we’ve had at Clemson, and he does that not only through his play on defense but also through his love of special teams.”

Simmons said Venables trusted him to be in the right place.

“Honestly, week to week we were kind of experimenting where I would play,” Simmons said. “So, I always had something new I had to learn each and every week. Coach Venables had a lot of faith in me and a lot of trust in me and he was just able to utilize me in many different places.”

Simmons then said he was in awe of the fact that he gets to play with players like Patrick Peterson and Chandler Jones.

“Playing with those kind of players is really crazy, because you know I've been playing as them on Madden for a really long time,” Simmons said. “So I'm now their teammate so that's pretty crazy. I can't wait to just learn from them and just soak in everything that they have to teach me and everything that they do, just everyday life. They're all great players.”