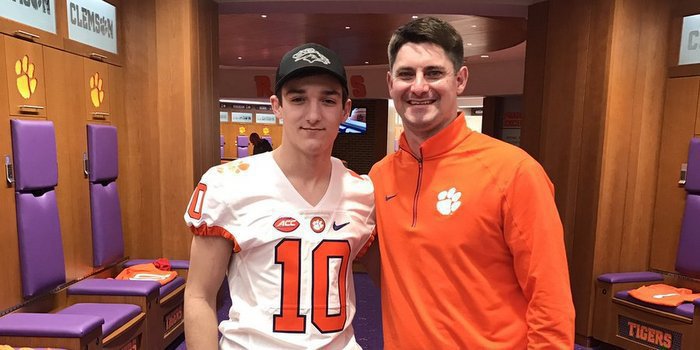 Clemson has a shot at landing one of the top kickers for the 2018 recruiting cycle, and a visit to head coach Dabo Swinney’s high school camp in June is the first step.

The Clemson coaching staff played host to B.T. Potter of Rock Hill (SC) South Pointe last weekend - a visit he made with his family. Potter told TigerNet Thursday night that he had the full attention of co-offensive coordinator Jeff Scott.

“It was really great. The thing that stood out to me the most was the amount of time the coaches spent talking to me and my family,” Potter said. “I spent a lot of time with Coach (Jeff) Scott. The facility for sure - the amount of stuff they have there is crazy.”

Potter’s lone offer is from Mercer, but he said Clemson laid out their plans for him.

“Coach Scott came to a few of my games this past season and mostly my kickoffs are standing out to them. If I do well at that their camps this summer, I could receive a gray shirt offer,” he said. “If that happens and I choose to go there then I could compete for a kickoff spot my freshman year. He told me with the gray shirt, I could still come in my freshman year, but I wouldn't be on scholarship because they only have a few scholarships for the 2018 class and then the 2019 class there would be more scholarships available.” 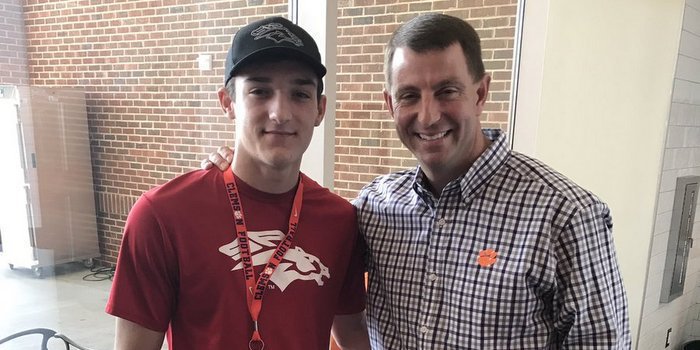 “I would definitely be interested in it, but I'm really interested in any school right now that believes in me,” Potter said. “It would be a good thing for sure. Mostly, I talk to Oklahoma a good bit, South Carolina, California and Indiana. Right now, I don't have any favorites.”

The family got to watch a good bit of Clemson’s practice, but Potter didn’t get the chance to speak with current kicker Greg Huegel. Huegel shares the same kicking coach as Potter – Dan Orner out of Charlotte.

“I went to practice, but there just wasn't ever a chance to talk to him. I've talked to him before because we go to the same private coach in Charlotte,” Potter said. “I'm not going to lie before I went to Dan I was not good at all. He really helped me become who I am today and he's still helping me a lot with my punting. He's really good at being a punting coach. The past eight years, he's been the coach for the Clemson kicker.”

One of the highlights of Potter’s visit was watching his mother take a trip down the famous slide in the new football complex.

“We were coming back from our meeting and going down to the locker room,” he said. “My mom wanted to go down the slide so coach took us over there. I went down first and I was ready. I was going to video it because I knew something was going to happen, and as soon as she started coming I knew she was going to fall. The slide is a lot faster than you would think. I was shocked.

“Just the amount of stuff they have there is crazy. I did not get bored one time. The beds in the nap room are so comfortable. They have a barber shop in there and I didn't expect that.”

Potter said he will be back on campus for Clemson’s spring game on April 8th.

Guess you can say my mom enjoyed the visit today ???? pic.twitter.com/yicbNwtLhD