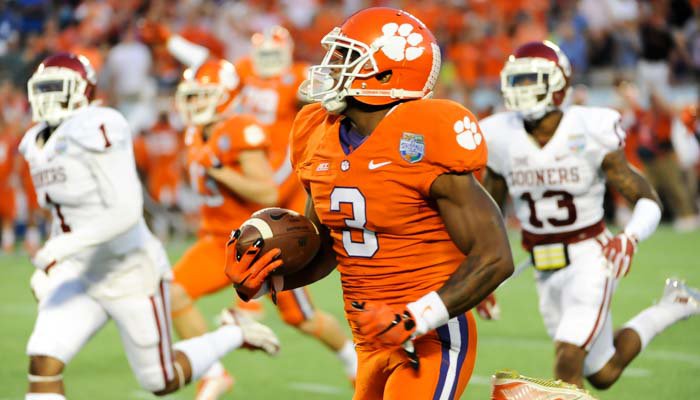 ORLANDO, FL – It wasn’t a perfect first half in Orlando, but it might as well have been.

Clemson jumped out to a 17-0 first quarter lead and intercepted Oklahoma quarterback Trevor Knight twice and the Tigers lead the Sooners 27-0 at halftime of the Russell Athletic Bowl in the Florida Citrus Bowl Stadium.

The Tigers held Oklahoma’s high-powered offense in check for most of the half – including three-and-outs and the Sooners’ first two possessions..

Cole Stoudt
Sr. Quarterback
#18 6-4, 231
Dublin, OH
View Full Profile – who has had a much maligned season, battling a shoulder injury and inconsistency on the field. When the prognosticators made their picks, most picked Oklahoma because of Stoudt’s play in recent games, however the senior played relatively well in the first half. Stoudt was 15-for-19 for 177 yards and two touchdowns.

Stat of the half:Clemson's defense has held Oklahoma to just 64 total yards - 37 yards on the ground and 27 through the air. Sooners highly touted running back Samaje Perine had 11 carries for 42 yards - a 3.8 yard per carry clip - and fumbled late in the second quarter. Quarterback Trevor Knight is 5-for-13 with two interceptions and just 27 yards. Oklahoma had just five first downs, while Clemson had 12. The time of possession saw Clemson control the clock for 15:45 of the half. Oklahoma also has five penalties for 45 yards, while the Tigers haven’t been whistled for a flag.

What’s working for the Tigers: Clemson’s defense has been stellar through the first half and the offense has been moving the chains without putting the football at risk. Clemson’s receivers are blocking well on the perimeter, and for the most part Stoudt is getting the ball out quick to the perimeter. Defensively, the Tigers are controlling the line of scrimmage, and the Sooners’ big offensive line is having trouble with the Tigers’ speed. Ben Boulware

What’s not working for the Tigers:Sacks. Clemson gave up three sacks in the first half, but not all of them were on the offensive line. Special teams miscues could also come back to hurt the Tigers if they don’t get the mistakes corrected.

What the Tigers need to do to win:Don’t turn the ball over and control the clock in the second half. Expect to see a heavy dose of the running game in the second half, but the offense will also continue to throw the short passes as long as the Sooner corners continue to play so far off the ball.