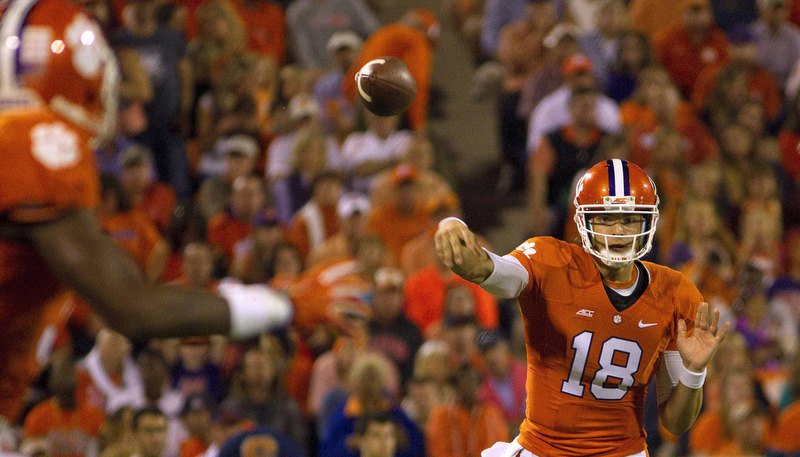 Stoudt is responsible for two of Clemson's turnovers (Photo by Joshua S. Kelly)

CLEMSON – If you like defense and offenses that struggle to gain even small chunks of yardage, you loved the first half of Clemson’s Homecoming game against Syracuse Saturday.

Clemson’s offense remains mire in a slump – much of the damage was self-inflicted with three turnovers – and the Orange lead the Tigers 6-3 at intermission.

Player of the half: Clemson’s defense. The defense allowed just 118 total yards and two field goals, but the Tigers still trail. After a Clemson turnover late in the first half, the defense forced the Orange to lose six yards, but a long field goal as time expired gave the Orange the lead.

Stat of the half: The Tigers have as many turnovers (3) as they do points.

What’s working for the Tigers: Other than the defense? Ammon Lakip

Ammon Lakip
RS Jr. Kicker
#36 5-10, 200
Alpharetta, GA
View Full Profile hit a 38-yard field goal for Clemson’s first points. The defense continues to come up with stops, and twice they provided the offense the ball in Syracuse territory. Following a Clemson turnover late in the half, the defense held yet again and forced a Syracuse punt with 1:30 left before intermission. Clemson’s rush defense has been outstanding, holding the Orange to just 59 yards on 22 attempts, an average of 2.7 yards per attempt.

What’s not working for the Tigers: The Clemson offense is, well, offensive. Stoudt threw a huge interception with the ball in Syracuse territory early, and C.J. Davidson

C.J. Davidson
RS Jr. Running Back
#32 5-10, 203
Clemson, SC
View Full Profile fumbled away another possession with the Tigers. After Clemson’s defense forced a punt late in the half, Stoudt fumbled away another possession. Clemson had 19 rushing attempts for just 61 yards, an average of 3.2 yards per attempt. Davidson appeared to give the Tigers a spark in the running game, but his fumble makes you wonder how much action he will see the rest of the night.

Other thoughtsWe heard all week about how running back Tyshon Dye

Tyshon Dye
RS Fr. Running Back
#23 5-11, 214
Elberton, GA
View Full Profile would play this week, but Dye was a no-show in the first half. Will we see him in the second half?

*Stoudt hasn’t played very well at all, but none of the backup quarterbacks even attempted to warm up. Will we see some of Nick Schuessler