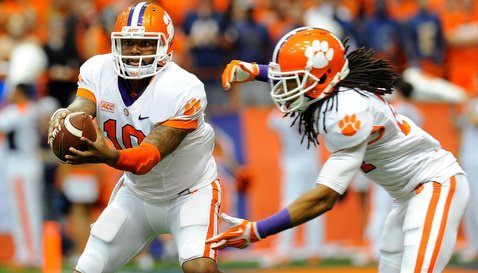 SYRACUSE, N.Y. – It doesn’t matter who or where the Clemson Tigers play, they just take care of business every week.

The Tigers traveled to the Carrier Dome and had everyone questioning if they could play in a hot and humid Dome against a fired up Syracuse team on Homecoming.

It was over when: The Syracuse offense threatened the Tiger’s lead for much of the third quarter – scoring on its first possession of the second half and then driving deep into Clemson territory twice more. However, with 40 seconds left in the third Tajh Boyd

Game ball goes to: Despite throwing two interceptions – the first two of the season – Boyd deserves the game ball for tying his own record of five touchdown passes. Boyd also completed 20-of-27 passes for 455 yards – also a new school record and eclipsed the 10,000-yard mark.

Stat of the game: Every week, Boyd breaks a new record. This week was the school record for passing yards. Boyd threw for 455 yards in three quarters of play.

What it means for Clemson: The Clemson Tigers heard all week how Syracuse was ready was ready for them and that it would be difficult to escape the Carrier Dome victorious. However, the Tigers answered the bell to continue their undefeated streak. Clemson continues to prove that it can take care of business – beating its 12th consecutive unranked opponent by double digits. Now, the Tigers must maintain that focus against Boston College next weekend before looking ahead to a possible primetime matchup with Florida State in two weeks.

What it means for Syracuse: Syracuse made the move from the Big East to the ACC this season, but it may take a little bit of time to transition to playing bigger, stronger, faster football teams like Clemson. The Orange played with a lot of heart, but it just wasn’t enough. If they play with that type of enthusiasm every week they will win a couple of conference games this season.