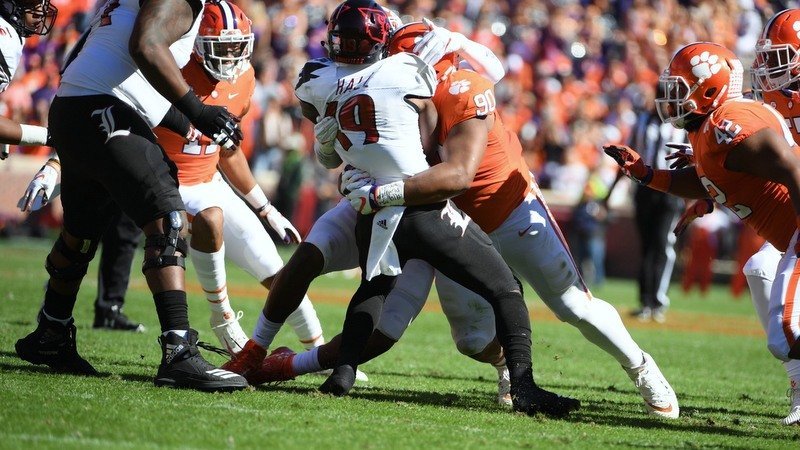 Dexter Lawrence with the big hit early in the first half

CLEMSON – Big plays, plenty of cheers, and plenty of boos have highlighted a frantic first half between Clemson and Louisville.

The Tigers are in control, but a strong start turned into mistakes and miscues in a hectic second quarter and Clemson leads Louisville 35-3 at the half.

PLAYER OF THE HALF: Linebacker Kendall Joseph has led the defensive charge and has a whopping nine tackles at the break. That includes 1 ½ tackles for loss and a half a sack. Honorable mention to Travis Etienne, who has seven carries for 112 yards.

Also – late in the second quarter, left tackle Mitch Hyatt earned a rare distinction: he’s played the most snaps of any player in Clemson history.

STAT OF THE HALF: Louisville has 90 passing yards to just 44 for the Tigers. Louisville also has an overwhelming lead in time of possession.

WHAT WENT RIGHT: Almost everything. Louisville won the toss and elected to defer. Five plays later the Tigers scored the opening touchdown of the game. A quick punt and another play later the Tigers led 14-0.

Clemson running backs ran at will, averaging 15.1 yards per carry.

Clemson hasn’t allowed a touchdown in the first half in each of the last four games.

Clemson’s defense forced a turnover early in the second quarter – Isaiah Simmons intercepted a pass and returned it 27 yards for a touchdown, the first touchdown and interception of his Clemson career. Simmons is the third defensive player to score a touchdown this season for the Tigers and Clemson has forced a turnover in 18 straight games, the longest streak since the 2004-05 season.

WHAT WENT WRONG: The defense allowed a 16-play Louisville scoring drive and several missed assignments led to Louisville first downs. Things got so bad on the Cardinal scoring drive that head coach Dabo Swinney called a timeout and spent the better part of 60 seconds chewing out the defense.

It worked on that drive as the defense stiffened and held the Cardinals to a field goal.

Leading 28-3, the offense had a procedure penalty that led to a punt and on ill-advisedorner AJ Terrell was flagged for targeting after a hit on the returner. The call was upheld and Terrell was ejected. He won’t have to miss any more time because the penalty occurred in the first half.

Following a Clemson defensive stand – holding on fourth down – Trevor Lawrence threw into double coverage on the very next play. The throw was off target and ill advised.

TURNING POINT OF THE HALF: The decision to kick off instead of receive to start the game. If the Cardinals had put together a lengthy drive to open the game they might have had a chance. As it was, the offense was put in an early hole and never recovered.

WHAT CLEMSON NEEDS TO DO TO WIN: Stay the course and stay healthy. Expect the Tigers to play plenty of players the rest of the way.