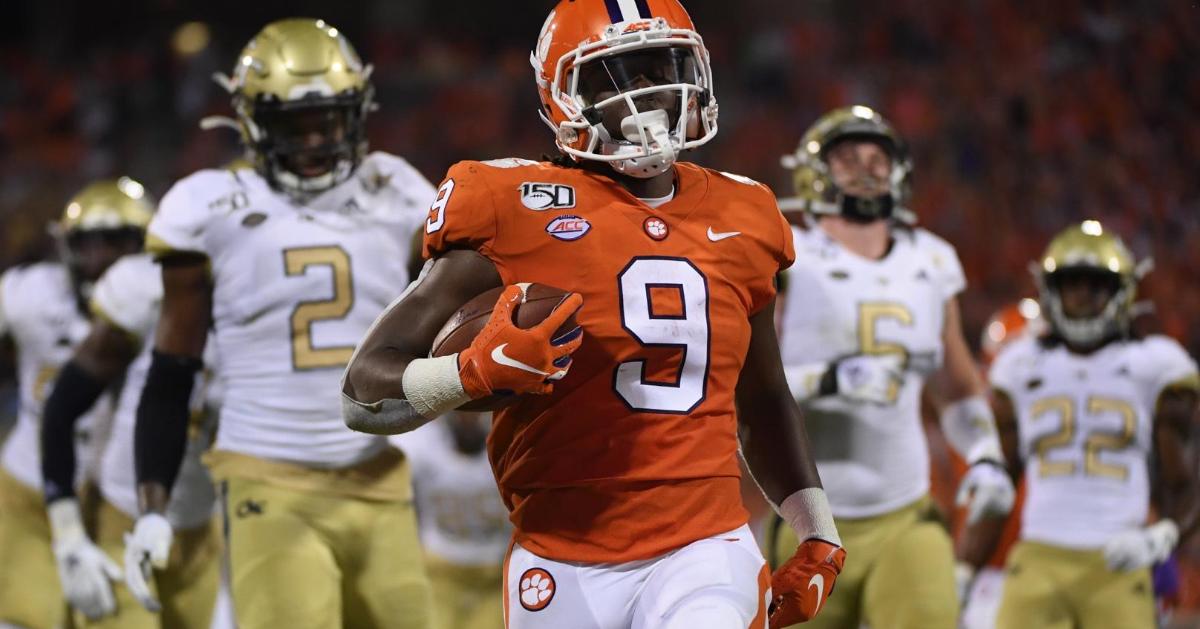 Etienne scored twice in the first half

Sure, there will be plenty to clean up at halftime, but no one can complain about a 28-0 lead over Georgia Tech that featured exhilarating offensive plays and four-down goal-line stands.

PLAYER OF THE HALF: Travis Etienne started off a little slow but once the holes started to open, he got going. After a holding call negated a long run by quarterback Trevor Lawrence, Etienne took it 90 yards down the Clemson sideline for the Tigers’ second score of the game. The touchdown tied Banks McFadden and Buck George for the longest run in Clemson history. It also put Etienne over 2,500 yards for his career. Etienne finished the half with 10 carries for 145 yards and two touchdowns.

STAT OF THE HALF: With the touchdown Clemson ended Georgia Tech’s streak of 68 straight season-opening games allowing no more than 10 1st-quarter points, which was the 2nd-longest streak by a major-college team since classification began in 1937. The longest? Clemson: 71, 1937-2007.

*QB Run – Trevor Lawrence was challenged during the offseason to use his legs more and he came out running Thursday night. Not only did he pick up chunks of yards when his number was called, but he also was smart, getting out of bounds and avoiding getting hit.

*Goal-line stands – Trevor Lawrence threw his first interception of the season when Tre Swilling jumped a pass. Lawrence raced downfield to stop Swilling at the three-yard line and Clemson’s defense took over. The defense stood tall for four downs that culminated in a Denzel Johnson interception on fourth down in the endzone.

*Tech’s ground attack: While Georgia Tech wasn’t wildly successful on offense in the first half, they did have success at times running the ball against Clemson’s young defensive line.

TURNING POINT OF THE HALF: Will Spiers’ 42-yard punt hung in the air long enough for the coverage to get down the field, and Tech’s Jalen Camp fumbled the catch. The ball was recovered by Baylor Spector at the Tech 16-yard line, and six plays later Lawrence took the read-option and waltzed almost untouched into the endzone for a six-yard touchdown and a 7-0 Clemson lead.

WHAT CLEMSON NEEDS TO DO TO WIN: Georgia Tech has played about as well as possible considering the philosophy shift with the new coaching staff, but Clemson is just better.

If the Tigers take care of the ball and tighten up in the defensive front, they should walk away with win number one in 2019.