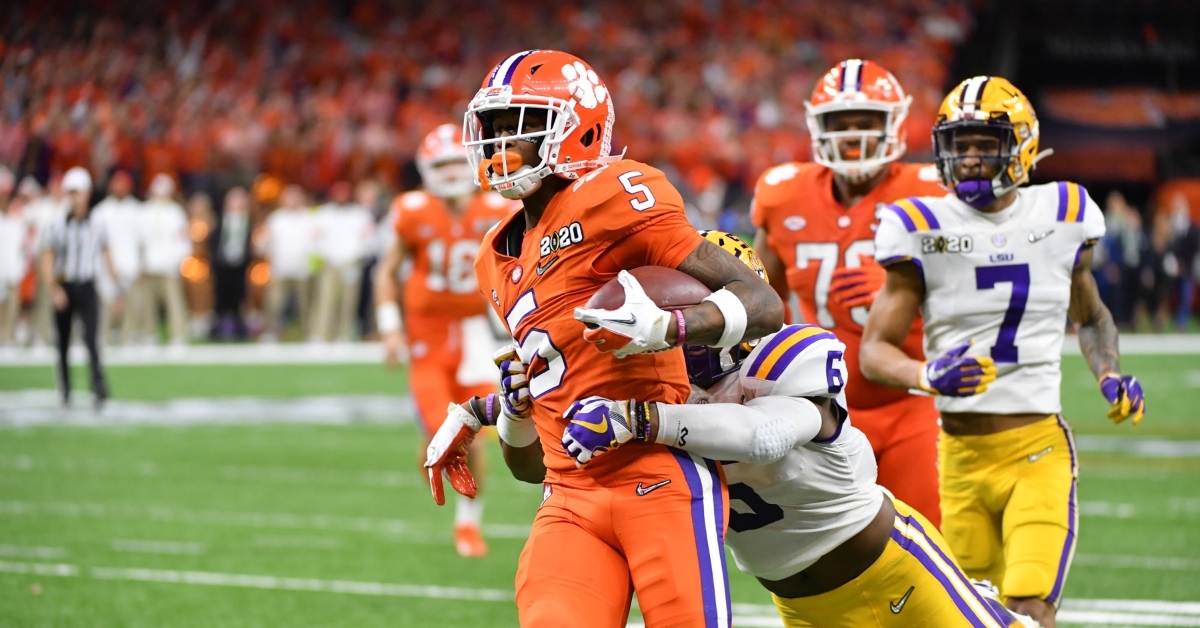 Tee Higgins makes a play in the first quarter

NEW ORLEANS, LA – After feeling each other out for much of the first quarter, Clemson and LSU is everything we expected.

There were big plays, good quarterback play and plenty of excitement in the first half of the CFP National Championship game at the Super Dome Monday night. LSU leads Clemson 28-17 after the first half.

PLAYER OF THE HALF: Will Spiers is having himself a postseason. He had an excellent performance in the Fiesta Bowl against Ohio State and followed that up with another great half. Spiers pinned LSU deep on three of his punts, forcing LSU to begin on their own three, seven and four yard line.

STAT OF THE HALF: In his home state, Travis Etienne became Clemson’s all-time leading rusher and the first Clemson player to eclipse 4,000 rushing yards. Etienne carried the ball 10 times for 64 yards in the first half.

*Defense in spurts – Clemson’s defense played well for much of the first half, limiting touches by the LSU wide receivers and controlling the run game with just three down linemen and one linebacker.

*Misdirection – LSU showed at times during the season to be susceptible to misdirection on defense and Clemson took advantage of that on a couple of occasions but it paid off on a reverse to Tee Higgins that went for a 36-yard touchdown.

*Short fields – Twice in the first quarter Clemson had good field position after Clemson’s defense forced back-to-back three-and-outs but the offense couldn’t do anything and came away with zero points.

*Ja’Marr CHase – Clemson defensive backs did an excellent job on LSU’s wide receivers, but they let Chase get free twice. The first time was a 52-yard touchdown. The second set up Joe Burrow’s three-yard touchdown run.

*Tackling – Clemson’s defenders were in good position but failed to make the tackle when they got their hands on the LSU playmakers.

TURNING POINT OF THE HALF: With just over seven minutes to play in the half, Clemson punted and pinned LSU on the 14, but LSU’s defense became what we were all expecting before the game. Joe Burrow ran the ball when needed, he hit Clyde Edwards-Helaire in the passing game and finished the drive with a touchdown pass to Ja’Marr Chase to give LSU a 21-17 lead, its first of the game.

WHAT CLEMSON NEEDS TO DO TO WIN: Offensively, Clemson needs to move the ball with more consistency. Too many short drives hurt Clemson. Travis Etienne got going in the second quarter and Clemson will need that to continue in the second half.

On defense, Clemson did a good job against LSU’s wide receivers for the most part, but they quarterback Joe Burrow hurt them on the ground. Burrow wants to throw the ball but much like Trevor Lawrence he isn’t afraid to run the ball. He picked up 20 yards on one drive and rushed for a three-yard touchdown for LSU’s second score of the game, while also picking up big chunks late in the second quarter.