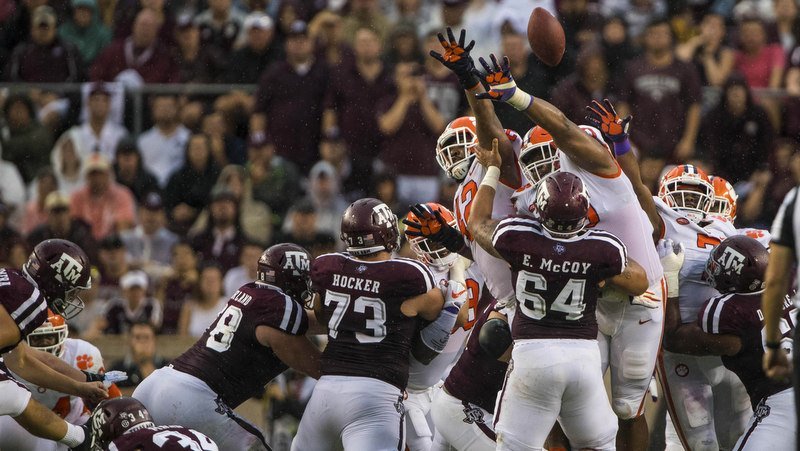 COLLEGE STATION, TX – There was good and there was bad in the first half, but Clemson made the long walk to the locker room with a 14-3 lead over Texas A&M at halftime.

The Aggies took the opening kickoff and put together an 11-play, 66-yard drive that ended inside the Clemson 10. However, A&M kicker Daniel LaCamera missed a chip shot field goal and the Aggies came away with no points.

A short punt led to another A&M drive that reached Clemson territory, and this time LaCamera hit a 40-yard field goal for a 3-0 lead with 4:28 remaining in the first quarter.

Facing a third-and-long deep in its own territory on the ensuing possession, Clemson needed a big play and got it from Amari Rodgers. Bryant rifled a pass through the raindrops that Rodgers took 64 yards to the Aggie 16. Three plays later Bryant dumped a pass in the flat to Travis Etienne, who bulled his way to the Aggie one. Bryant carried into the end zone on the next play, giving Clemson a 7-3 lead at the 1:23 mark of the first quarter. The drive covered 75 yards on seven plays.

Clemson’s defense settled in and forced another A&M punt and the Clemson coaches allowed Lawrence to get his first snaps of the game. It took just one of those snaps to score. Lawrence threw a ball up on the left sideline that Tee Higgins went up and over the defensive back to make the catch. Higgins came down on the sideline, beat a few defenders to the middle of the field and raced 64 yards for the score. Early in the second quarter, Clemson held a 14-3 lead.

PLAYER OF THE HALF: Travis Etienne hasn’t found the endzone but he’s done enough to keep the Aggie defense honest. The sophomore from Louisiana has four carries for 33 yards, including a long run on second down to pick up a first down and keep the Clemson offense moving.

STAT OF THE HALF: Texas A&M has been in the Clemson redzone twice – on the first two drives of the game – and has 3 points

Sometimes lucky can be better than good and Clemson got lucky on A&M’s first drive of the game. The Aggies came out firing on all cylinders, but while the Clemson defense bent, it didn’t break in the redzone being rewarded with a missed field goal.

Clemson’s defense got better as the game went on, eventually affecting Kellen Mond and getting numerous pass breakups.

The special teams units for Clemson have come under fire in recent seasons, but the interior of the line Christian Wilkins and Dexter Lawrence broke through to block a punt attempt, setting the Tigers up with good field position.

With the Jumbo Package – Dexter Lawrence, Christian Wilkins and Cannon Smith on the field – the snap from Justin Falcinelli went between Kelly Bryant’s legs and Adam Choice had no choice but to fall on the ball keeping Clemson’s out of the endzone on fourth down.

Kelly Bryant and Trevor Lawrence both missed open receivers in the first half and they both need settle down and make the plays that are in front of them.

TURNING POINT OF THE HALF: Clemson’s offense sputtered to begin the game in a wet and rainy College Station, but a long pass from Kelly Bryant to Amari Rodgers seemed to get things gong.

Facing a third-and-long deep in its own territory on the ensuing possession, Clemson needed a big play and got it from Amari Rodgers. Bryant rifled a pass through the rain drops that Rodgers took 64 yards to the Aggie 16.

WHAT CLEMSON NEEDS TO DO TO WIN: The defense needs to continue to pressure Kellen Mond and take the tight ends out of the game. Offensively, the Tigers need more consistency from the quarterback position – making the right reads and hitting open wide receivers – to put points on the board.