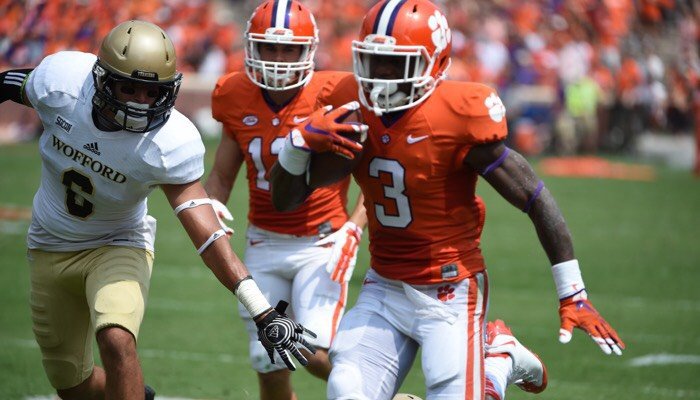 CLEMSON – Clemson’s 2015 opener got off to a scary start Saturday afternoon in Death Valley, but the Tigers lead Wofford 35-7 at intermission.

Deshaun Watson
So. Quarterback
#4 6-2, 207
Gainesville, GA
View Full Profile was leading the Clemson offense down the field on the opening series when Mike Williams

Mike Williams
Jr. Wide Receiver
#7 6-4, 213
Vance, SC
View Full Profile ran into the goal post, injuring his neck. Williams had to be carted off the field as the Death Valley crowd held its collective breath.

Clemson’s offense and defense never wavered, however, as Clemson led Wofford 35-7 at halftime

Player of the half: Williams deserves to be the player of the half despite only playing the first series. Williams did everything he could to make sure he scored the season’s first touchdown. As he was carted off the field, he pointed to the sky and heard the news that his catch was in fact a touchdown. He was then transported by ambulance to Oconee Memorial Hospital

Stat of the half: Clemson’s defense was dominant in the first half, as the Tigers gave up just 84 total yards – 53 of which came on the final drive of the first half after Clemson’s Hunter Renfrow

What’s working for the Tigers: Both the offense and defense were clicking on all cylinders in the first half. Offensively, Clemson had 117 yards on the ground and 250 through the air. Clemson is stifling Wofford on defense, smothering the run and not allowing any passes down field.

Special teams was impressive in the first half. First year kicker Greg Huegel

What’s not working for the Tigers:Injuries have been an issue in the first half. Williams went down early with the neck injury, and midway through the first half Ryan Norton

What the Tigers need to do to win: This game won’t be in doubt in the second half as the Tigers are up 35-7 at intermission. The best-case scenario for Clemson is to sit the starters and get the younger players some game experience.