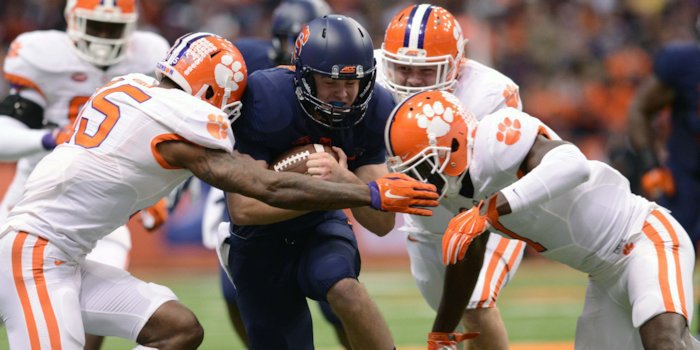 SYRACUSE, NY – It’s weird and wild in the Carrier Dome.

Clemson jumped out to a 14-0 lead in the game’s first two minutes, saw Syracuse take advantage of two turnovers to tie the score and the Tigers lead the Orange 31-17 at the half.

Deshaun Watson has been electric – he is 20-of-26 for 266 yards and two touchdowns – and Charone Peake has a career-high with five catches for 99 yards.

Syracuse won the toss and elected to defer, a decision that cost them a quick touchdown. The Tigers threw deep on the game’s first play and Watson hit Charone Peake in stride for a 64-yard gain. Wayne Gallman took the next play to the left side and rumbled his way into the end zone from 11 yards out for a 7-0 lead just 33 seconds into the game. It was the sixth time this season the Tigers had scored on the game’s initial drive, and the second time Clemson scored on the game’s second play.

The first play of the game for Syracuse was a fumbled snap that was recovered by Kevin Dodd at the Syracuse 23 yard line. Five plays later – aided by a Syracuse offsides penalty on third down – Watson powered in from three yards out and Clemson had a 14-0 lead just two minutes into the game.

The Tigers forced a Syracuse punt, but Clemson handed the ball right back. The Tigers inserted Kelly Bryant at quarterback and lined Watson up outside, but Kelly fumbled the ball on the inside run and Cuse took over at the Clemson 28. One play later, Ervin Phillips raced untouched into the end zone and Clemson led 14-7.

Four plays later, Watson threw to Hunter Renfrow in the seam for a 21-yard gain but Renfrow fumbled at the end of the run to give Syracuse new life at their own 46. However, Jayron Kearse ended the drive by blocking a 48-yard field goal attempt.

Clemson punted on the ensuing drive, and Syracuse took advantage of poor Clemson run defense to tie the score. The Orange had a 42-yard rush by Jordan Fredericks that set up a 10-yard scoring run by Zack Mahoney, tying the score at 14-14 with 3:34 to play in the fourth quarter.

It took Clemson 10 plays and 75 yards to respond. Watson threw several quick hitters to the sideline to march down the field and capped the drive with a four-yard scoring toss to Peake, a throw to Peake’s back shoulder as he fell down, and Clemson led 21-14 at the end of the first quarter.

The Tigers forced another Syracuse punt, and Clemson’s offense didn’t take long to strike. Zac Brooks took the first play of the drive 24 yards into Syracuse territory and two plays later Watson dropped a 40-yard throw over the shoulder of Deon Cain for a 28-14 lead two minutes into the second quarter.

That set up a series of weird plays – punters run into, long plays called back because of penalty and a fake punt – the latter setting up a Cole Murphy 48-yard field goal that made it 28-17 with 3:20 to play in the half.

Clemson added a 38-yard field goal by Greg Huegel with 37 seconds left before the half and Clemson holds the two touchdown lead.

THE GOOD: Watson and the offense have been almost unstoppable when they aren’t turning it over or getting called for penalties. The Tigers rang up 352 total yards on 41 plays and are averaging 8.59 yards per play. Those are outstanding numbers, and without the two penalties might have scored even more.

THE BAD: The defense has been gashed by the Orange attack. Clemson has lost containment, failed to set the edge, suffered poor tackling and technique and generally let Syracuse off the hook with several big plays on third down. If Clemson is to get the win, and impress the College Football Playoff committee – the defense will have to get better in the second half. The Tigers have let Syracuse run 32 plays for 145 yards.

WHAT WOULD WE LIKE TO SEE: Where did the running game go? Gallman had six carries in the first quarter but just two in the second quarter. Granted – the passing game is working – but Clemson needs to run the ball with authority in the second half.

WHAT CLEMSON NEEDS TO DO TO WIN:Just keep the pedal down on offense and stop giving up the big plays on defense. Clemson is more talented, but poor technique and a lack of sideline to sideline speed at linebacker have hurt.