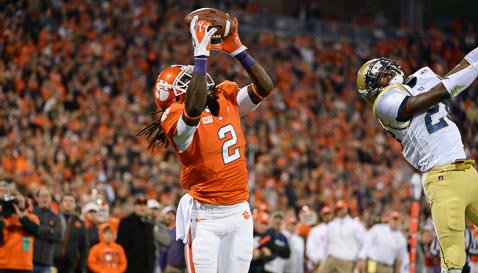 CLEMSON – The temperatures and the fans may be cold, but Clemson’s offense and defense came out red hot in the first half, giving Clemson a 27-10 lead over Georgia Tech Thursday night.

The Clemson defense held the Georgia Tech offense to 72 rushing yards, with 33 yards coming on one run, and 185 total yards in the first half.

Clemson’s offense had 234 yards passing and 280 yards of total offense.

Player of the half: Tajh Boyd

Stat of the half: Georgia Tech has given up an average of 329.6 yards per game this season defensively, good for 13th nationally. The Yellow Jackets have already given up 280 total yards to Clemson in the first half.

What’s working for the Tigers: Boyd has been very accurate with most of his passes so far Thursday night and the receivers have done a good job getting open and getting behind the defense. Outside of the 32-yard run by Robert Godhigh in the second quarter, Clemson’s run defense has been stout and not giving much ground to the Yellow Jacket flexbone offense.

What’s not working for the Tigers: With Georgia Tech in such a big hole, the Clemson defensive backfield needs to remain cognizant of Tech quarterback Vad Lee’s ability to throw and not give up long first downs. Clemson’s offense has been great passing the ball, but the Tigers haven’t been able to get the ground game going thus far.

What the Tigers need to do to win: More of the same. Clemson’s offense is clicking pretty well and the guys on defense are playing disciplined football and not allowing Georgia Tech to get into an offensive flow. If the Tigers can keep up the intensity on both offense and defense, they should be able to hold on for the victory.