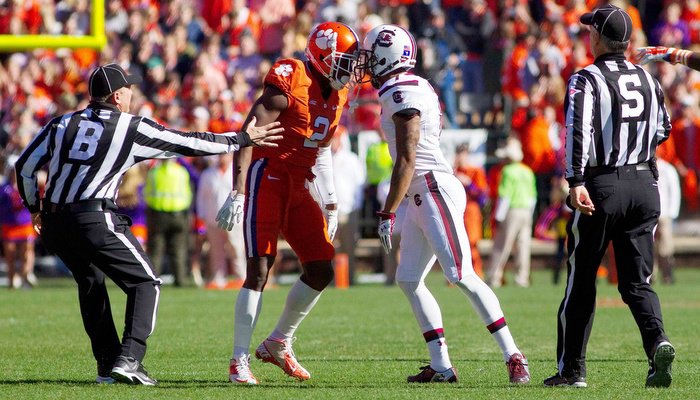 Deshaun Watson
Fr. Quarterback
#4 6-3, 204
Gainesville, GA
View Full Profile made a successful return and led the Tigers to a 21-7 second quarter lead, but a Cole Stoudt

Watson has limped in and out of the game a few times, but when he is in the game the offense has no problem moving the football. However, Watson limped out to the sideline during a Wildcat play late in the first half, and immediately went to the sideline and then the locker room.

The Tigers were driving and hoping to improve on that 21-7 lead, but Cole Stoudt threw an interception that led to a South Carolina field goal.

Player of the half:Take your pick – Artavis Scott

Stat of the half: South Carolina had 19 plays for 97 yards in the first quarter, but managed just 21 yards on 15 plays in the second quarter. Overall, Clemson has 307 total yards while the Gamecocks have just 118.

What’s working for the Tigers:The running game and pretty much everything that centers on Watson. Gallman has had a big half, and Scott has taken two pitches that count as passes for long runs. Right now, the Gamecocks don’t have an answer for the Tigers on the perimeter.

Clemson’s defense got off to a rocky start, but forced a fumble that led to a touchdown.

What’s not working for the Tigers:Punter Bradley Pinion

Bradley Pinion
Jr. Punter
#92 6-6, 230
Concord, NC
View Full Profile hasn’t had his best afternoon. Stoudt got a couple of chances in the first half, and he threw an interception that led to three South Carolina points.

What the Tigers need to do to win:Get Watson back out on the field, run the football and continue to turn the defense loose. However, if Watson isn’t able to go and it’s up to Stoudt, then the Tigers might have trouble scoring points. It’s that simple.