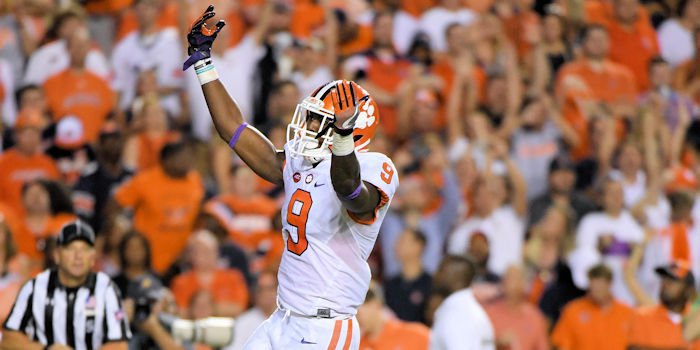 Clemson and Auburn have been in a dogfight since the opening whistle, with both teams’ defenses seemingly dominating the game.

Auburn struck first with a 53-yard field goal off the leg of Daniel Carlson, who set a school record with his sixth career kick of over 50 yards.

Clemson responded with an 84-yard scoring drive, capped off with Wayne Gallman walking into an endzone guarded by Christian Wilkins and Dexter Lawrence.

The Tigers from South Carolina tagged on a 30-yard field goal by Greg Huegel with seven seconds remaining in the half for a 10-3 advantage.

PLAYER OF THE HALF:Defensively, the players of the half have to be freshman Dexter Lawrence and sophomore Christian Wilkins. Lawrence led the team with five total tackles and one sack, while Wilkins added a sack of his own. Both players, were in on Clemson’s “jumbo” package on fourth down when Gallman scored Clemson’s only touchdown of the half.

Offensively, Mike Williams has looked unstoppable. The junior wide receiver – who missed all of last season with a broken neck – has six catches for 105 yards. He does have a fumble, but when he’s been targeted, the Auburn defensive backs haven’t been able to cover him.

STAT OF THE HALF:Auburn ran 23 plays in the first half and Clemson has six tackles for loss.

WHAT WENT RIGHT: Clemson’s defense was dominant in the first half, giving up just 38 yards on 23 plays. Auburn has just one rushing yard and 37 passing yards They are 2-of-7 on third down.

Clemson’s offense looked better in the second quarter, but got off to a sluggish start. Deshaun Watson started the game 3-of- 8 before finishing the half 8-of-11 for 148 yards. Clemson has 233 total yards – 85 on the ground and 148 through the air.

WHAT WENT WRONG: Clemson’s offensive line wasn’t opening up many holes in the first part of the game. Clemson needs to find more consistency on offense and give the defense more time to breathe on the sideline, as they were just 2-of-8 on third down.

TURNING POINT OF THE HALF: Clemson elected to go for it on fourth down on the goal line to try and take the lead, bringing in Lawrence and Wilkins, who allowed Gallman to walk into the endzone untouched for the first score of the 2016 season.

WHAT CLEMSON NEEDS TO DO WIN:It’s easier said than done, but Clemson needs to keep up the defensive pressure.

On offense, Watson needs to get in sync with his wide receivers and find the long ball. Ball security and good blocking up front in the run game will be imperative in the second half.