CLEMSON – Are the Tigers looking ahead to next week?

Offensively, it appeared that way as the Tigers struggled to get any sort of momentum. The Tigers showed signs of life on several drives, but never could manufacture any points as they trail 7-3 at the end of the first half.

During halftime, the Clemson offense needs to take a deep breath and come back out mentally focused and strong if the Tigers are going to avoid the upset.

Player of the half: Korrin Wiggins 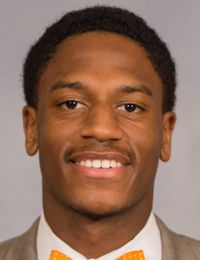 Korrin Wiggins
Fr. Defensive Back
#12 6-1, 185
Durham, NC
View Full Profile – the freshman defensive back/ nickel back played an outstanding half of football, playing disciplined defense. Wiggins had a huge tackle on third down and also an interception that bounced off of several Eagles’ offensive linemen.

Stat of the half: The Clemson offense fumbled the football four times – two by quarterback Tajh Boyd

Tajh Boyd
RS Sr. Quarterback
#10 6-1, 225
Hampton, VA
View Full Profile and two by running backs, losing two of those. Coming into the game, the Tigers hadn’t fumbled the ball on offense this season.

Clemson has an amazing 280 yards of total offense, but just the three points.

What’s not working for the Tigers: Nothing about Clemson’s offense worked in the first half once the Tigers crossed midfield. The Tigers had over 260 yards of total offense, but failed to score any points. The Tigers also fumbled the ball four times. Clemson was just one-for-seven on third down and one-for-four on fourth down. Special teams have not been reliable as Catanzaro missed a field goal on the first drive of the game and then there was another mix up on another field goal attempt that ended with a turnover on downs.

What the Tigers need to do to win: The Clemson offense needs to get things rolling and limit the turnovers. Boyd did a good job for the most part taking what the defense gave him, which was a lot. The Tigers are beating themselves and need to go back to playing Clemson football.