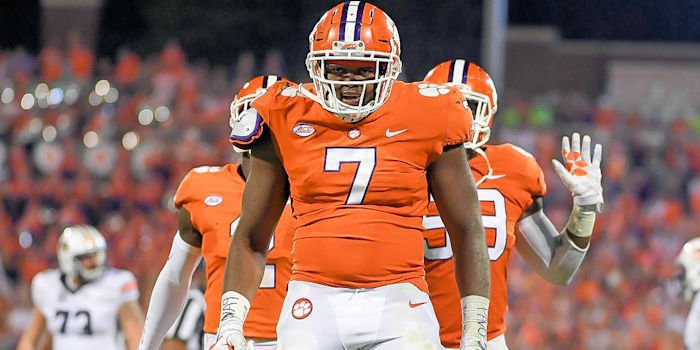 Austin Bryant celebrates after one of his four sacks

The Clemson defense was dominant and the offense did just enough as the No.3 ACC Tigers knocked off the 13th-ranked SEC Tigers 14-6 Saturday night in Death Valley.

OFFENSIVE PLAYER OF THE GAME:Kelly Bryant was beaten, battered and even knocked out of the game for a series, but he continued fighting and continued making plays through the air and with his legs. Bryant finished the night completing 19-of-29 passes for 181 yards and rushing for 68 yards and two scores on 19 attempts.

DEFENSIVE PLAYER OF THE GAME:One player from Clemson’s defense can’t be singled out because they all played well and all had stellar nights. Dorian O’Daniel had 14 tackles – a career high. Christian Wilkins had 2.5 tackles for loss. Austin Bryant had four sacks. Yes, four. The defense had themselves a night.

Defense stands tall early: Ray-Ray McCloud fumbled the ball on Clemson’s 11-yard line, but the defense came into save day. Auburn running back Kamryn Pettway got five yards on first down, but the Auburn offense went backward from there as the Clemson defense limited the damage to just a field goal.

Kelly finds his groove: Clemson’s offense started off shaky only picking up two first downs in the first quarter and a half, but midway through the second quarter, Kelly Bryant began to settle down and find his groove. Bryant completed four-of-five pass attempts before being knocked out for the remainder of Clemson’s drive as he was checked out by the medical staff. When he re-entered the game, he picked up right where he left off, completing six-of-nine passes and rushing for nine-yards, including the three-yard touchdown run.

Austin Bryant celebrates after one of his four sacks "

Second half momentum: Clemson won the toss and deferred – a move that’s been rare under Dabo Swinney – but it paid off. Bryant orchestrated an eight play drive, capped off by a 27-yard touchdown run where Bryant bounced off of defenders and outraced Auburn to pay dirt.

First down (Clemson) Tigers: Clemson needed a first down to keep possession and the clock moving late in the fourth quarter. Kelly Bryant, rolling out of the pocket found Hunter Renfrow down the Clemson sideline for a 13-yard gain and a first down.

STAT OF THE GAME: The all-time Clemson record for sacks in a game was in 1996 when Clemson played Furman. The Tigers’ defense sacked the Paladins 12 times. In Saturday’s game against Auburn, Clemson sacked Jarrett Stidham 11 times.

Clemson travels to No. 17 Louisville for a 3:30 matchup with reigning Heisman Trophy winner Lamar Jackson and the Cardinals at Papa Johns’ Stadium. Jackson and Louisville won a 47-35 decision over UNC earlier Saturday.

Auburn will be back in the friendly confines of Jordan-Hare for a 4:00 p.m. matchup with Mercer.