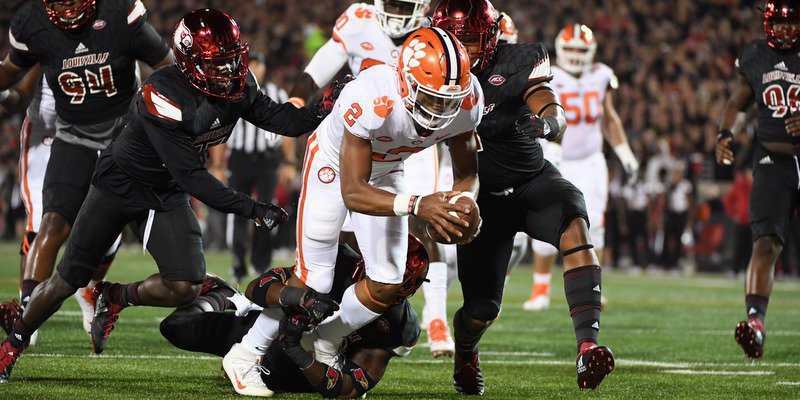 Kelly Bryant scores early in the first half

LOUISVILLE, KY – Clemson can’t win the ACC Atlantic Division in one night, but the Tigers took a big step toward their second goal Saturday night.

The 47-21 score will indicate a much closer game, but No. 2 Clemson was dominant in its fourth-consecutive win over No. 14 Louisville Saturday night at Papa John’s Cardinal Stadium.

OFFENSIVE PLAYER OF THE GAME:Every time anyone questions quarterback Kelly Bryant, he responds, and Bryant responded in a big way to the question of how he would react in his first road start. Bryant was 22-of-32 for 316 yards and a touchdown through the air and carried the ball 18 times for 26 yards and two touchdowns.

DEFENSIVE PLAYER OF THE GAME:Clemson’s entire defense did a great job of limiting Lamar Jackson’s explosive plays all night, but the defensive player of the game has to be Dorian O’Daniel. The Maryland native had six tackles, a tackle for loss and a pick-six.

Tigers strike first:After Clemson’s defense held Louisville on the opening drive of the game, the offense marched 79 yards down the field in 10 plays to take the lead. Bryant was 4-for-4 for 53 yards, including a 40-yard strike to Hunter Renfrow.

Muse ejected:Starting safety Tanner Muse was ejected with just under five minutes to go in the first quarter for targeting. Muse launched and collided with Jackson above the shoulders.

Pick six for No. 6:With 8:57 to go in the third quarter, senior Dorian O’Daniel climbed the ladder to pick off a Lamar Jackson pass. O’Daniel weaved through defenders for a 44-yard touchdown, the first of his career. Prior to the interception, Jackson looked like he put the Cardinals in scoring position, but a 50-plus yard run was called back because of an illegal block below the knees.

Huegel connects:Kicker Greg Huegel had a rough start to the season, going 0-for-2. Huegel made a 47-yard field goal, but it was negated by an offside call on Louisville. His re-kick from 42 yards – five yards closer – sailed wide right. However, Huegel redeemed himself with a 49-yard field goal – a career-long – later in the first half.

Tigers respond:After Clemson took a 33-7 lead, Lamar Jackson led the Cardinals down the field on a nine-play drive that took 3:55 to give Louisville fans a glimmer of hope, however, Clemson’s offense was having none of it. On 3rd-and-3, Bryant found Diondre Overton for 33 yards and Adam Choice took the ball 39 yards to the house on the very next play.

STAT OF THE GAME:O’Daniel’s interception was the first turnover forced by the Clemson defense this year. It took 151 defensive plays, but it did result in a touchdown. The last time the Tigers forced a turnover was in the 31-0 shutout of Ohio State in the Fiesta Bowl.

Clemson returns to Death Valley for a 3:30 tilt with Boston College, who lost 49-20 to Notre Dame.