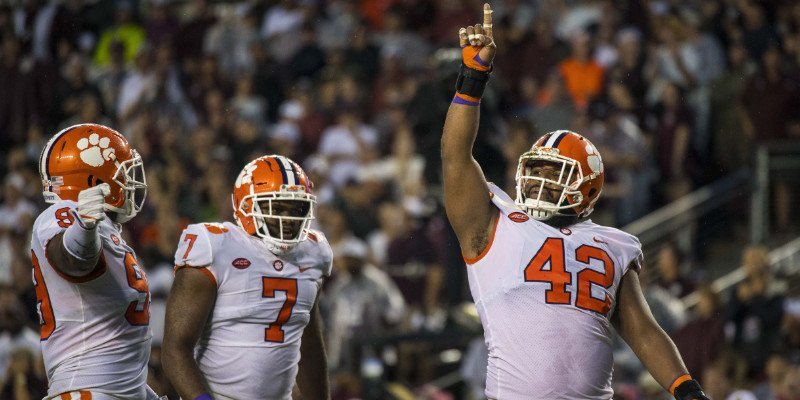 CLEMSON – ACC vs. SEC. Dabo vs. Jimbo. Offense vs. Defense.

Any way you want to describe it, Clemson and Texas A&M was by far the best game during the young 2018 college football season, but the Tigers found a win 28-26 in front of a sold-out Kyle Field.

OFFENSIVE PLAYER OF THE GAME: Kelly Bryant showed that this is still his team. Dabo Swinney showed his determination to play both Bryant and Trevor Lawrence early in the game, but the senior was just too good down the stretch. Bryant finished the game 12-of-17 for 205 yards and a touchdown. He also rushed for 54 yards and a score on 15 carries.

Runner-up (or 1A) has to be Tee Higgins. Higgins had probably his best game in a Clemson uniform. Yes, there was the offensive pass interference that wasn’t called, but the Tennessee native showed why he’s going to be a threat for the at least the next two years. Higgins finished the game with three catches for 123 yards and a touchdown.

DEFENSIVE PLAYER OF THE GAME: K’Von Wallace. When Clemson needed someone to step up, Wallace was there, including preventing a touchdown by punching the ball out of the endzone for a touchback. Wallace narrowly missed two interceptions but came up with a huge play after A&M scored a touchdown to bring the score within two points with just 46 seconds to play. Wallace picked off the two-point conversion to seal the win.

1A: Isaiah Simmons had probably the most difficult job of Clemson’s defenders. Simmons – the former safety and converted linebacker – had his work cut out for him against Texas A&M’s two tight end sets, but he rose to the challenge. His physicality and time at safety was never more apparent than midway through the fourth quarter with the game on the line. Simmons was covering a receiver down the sideline and used every bit of strength he had to jar the ball loose and force the Aggies to punt. Simmons wasn’t perfect but finished the game with a team-high eight tackles.

*Rodgers gets offense going: Clemson’s offense sputtered to begin the game in a wet and rainy College Station, but a long pass from Kelly Bryant to Amari Rodgers seemed to get things going. Facing a third-and-long deep in its own territory on the ensuing possession, Clemson needed a big play and got it from Amari Rodgers. Bryant rifled a pass through the raindrops that Rodgers took 64 yards to the Aggie 16.

*Bryant takes over: Dabo Swinney played both quarterbacks until midway through the third quarter when it was evident that Kelly Bryant had the hot hand and needed to manage the Clemson offense for the rest of the game.

*Controversial touchback: With just over two minutes to play and Texas A&M driving to pull within two points, wide receiver Quartney Davis ran for the endzone but was caught by K’Von Wallace on the three yard line. Wallace punched the ball out of Davis’ hands and through the endzone for a touchback giving Clemson the ball.

STAT OF THE GAME: The announced attendance at Kyle Field Saturday night was 104,794, the largest crowd a Clemson team has ever played against.

UP NEXT:Clemson returns home for its third nonconference game of the season. The Tigers host Georgia Southern next Saturday at 3:30.