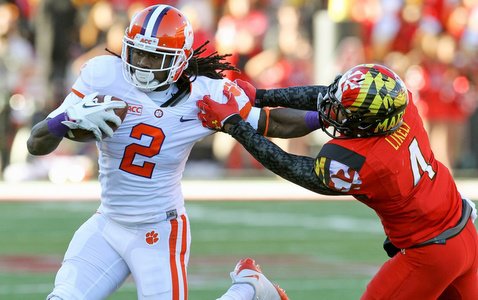 COLLEGE PARK, MD – It’s not about how you start the game, but rather how you finish.

The Tigers had a very lackluster start in a cold and windy Byrd Stadium, but the defense held and the offense found its groove late in the third quarter on the way to a 40-27 win over the Maryland Terrapins Saturday night.

It was over when: Bashuad Breeland knocked the ball out of Maryland running back Albert Reid’s hands and linebacker Spencer Shuey

Offensive stat of the game: Clemson’s rushing attack has been missing since the Georgia game, but the Tigers came out determined to run the ball against the second best rushing defense in the ACC. Clemson ran the ball 56 times for 248 yards – a 4.4 yard per carry average.

Offensive stat of the game: The Clemson defense had eight tackles for loss and four sacks.

What it means for Clemson: It wasn’t a thing of beauty, but the Tigers rebounded on the road from last week’s Florida State debacle with a double digit win over the Terrapins. With the win, Clemson has won seven consecutive games on the road and 15 games by double digits over unranked opponents. Every win keeps the Tigers’ BCS hopes alive.

What it means for Maryland: Maryland entered the game without 11 of their starters and kept the game close until late in the third quarter. There’s not a lot the Terps can do wit out their talented skill players, but they should have quarterback C.J. Brown back next weekend for the Syracuse game. The Terps can become bowl eligible with a win over Syracuse next weekend.