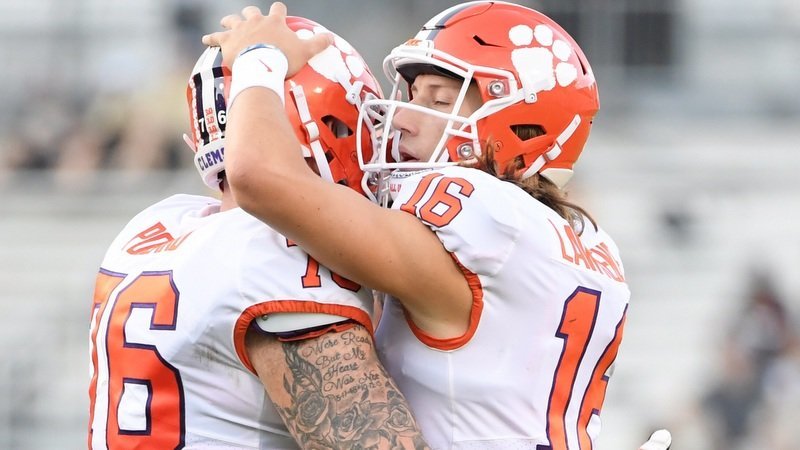 ATLANTA, GA – A trip to Georgia Tech was just what the doctor ordered for Clemson’s offense. However, after Trevor Lawrence’s performance Clemson’s coaching staff will have plenty of questions to answer.

Lawrence – the freshman signal-caller – finished the day 13-of-18 for 176 yards, four touchdowns and interception, but led six scoring drives overall. He led scoring drives to end the first half and begin the second half, essentially putting the game out of reach.

OFFENSIVE PLAYER OF THE GAME: Clemson’s running backs were excellent Saturday afternoon, especially the top three of Travis Etienne, Tavien Feaster and Adam Choice. Etienne finished the game with 11 carries for 122 yards and a score – a 11.1 yards per carry clip. Feaster had probably his best game of the young season with eight carries for 75 yards and a score. While Choice’s numbers aren’t eye popping, the job he did in pass protection during the final two-minutes of the first half didn’t go unnoticed.

DEFENSIVE PLAYER OF THE GAME: J.D. Davis got the start on short notice after Kendall Joseph didn’t make the trip due to a groin injury suffered during practice. Davis didn’t miss a beat and finished the game with 10 tackles and a sack.

*Fumble for a touchdown: After seemingly struggling against Tech’s offense on the first drive, Clemson’s defense settled in forcing a fumble. Tre Lamar knocked the ball loose and it was batted around by Christian Wilkins and J.D. Davis before Clelin Ferrell fell on it in the endzone for the game’s first points.

*Two-minute drill: The Tigers took over with under two minutes to play and Lawrence led a 12-play drive that took all but five seconds off the clock. Two tough completions set up a 21-yard completion to Amari Rodgers, giving the Tigers the ball at the Jacket 3-yard line with 11 seconds left on the clock. The Tigers called a timeout and Lawrence flipped a shovel pass that Travis Etienne carried into the end zone for a 28-7 lead at intermission.

*Offense clicking: The opening possession of the second half was more of the same. The Tigers drove 75 yards in just seven plays – five of them rushes – and Tavien Feaster capped the drive with a 27-yard touchdown run that made it 35-7 with 12:20 to play in the third quarter.

STAT OF THE GAME: Clemson's defense held Tech to 146 yards on 56 carries, an average of 2.6 yards per carry.

UP NEXT: Clemson returns home to host Syracuse – the only loss of the 2017 regular season – in a high-noon tilt in Death Valley.