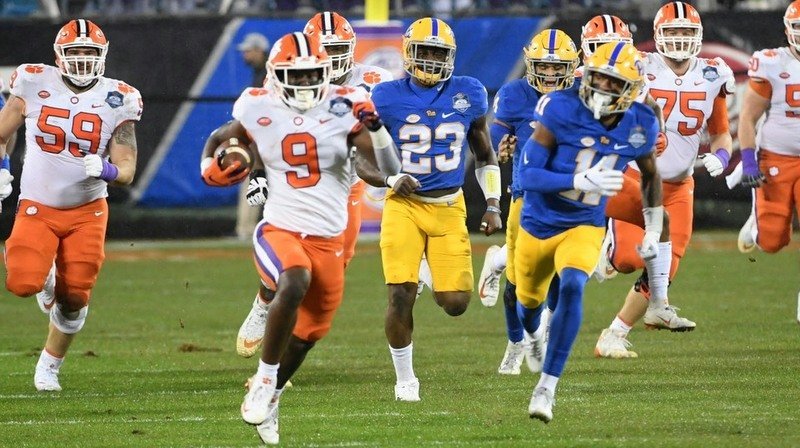 CHARLOTTE, NC – On a rainy night in the Queen City, Clemson showed why it is kings of the ACC.

No. 2 Clemson (13-0) took down Pitt (7-6) 42-10 at Bank of America Stadium to claim its fourth consecutive ACC Championship and should earn its fourth straight berth in the College Football Playoff.

It was a battle of the ground game between the Panthers and Tigers, but Clemson’s Travis Etienne won with 156 yards and two scores.

OFFENSIVE PLAYER OF THE GAME: Travis Etienne continued to show why he is arguably the best running back in the country and one of the most explosive players in all of college football. Etienne took the handoff on the first play of the game and outran the defense 75 yards for a touchdown. It was the quickest score (time) in ACC Championship Game history. The sophomore carried the ball 12 times for 156 yards and two touchdowns.

DEFENSIVE PLAYER OF THE GAME: Tre Lamar missed last week’s game due to an ankle injury but made his presence known throughout the entire game Saturday night. Lamar was stout against the run and wreaked havoc in the Pittsburgh backfield. Lamar finished the game with nine total tackles, two tackles for loss and a sack.

*Quick Start – Pitt won the toss, elected to defer, and promptly gave up a touchdown 13 seconds later. Etienne took the first handoff of the game, bounced over the right side, broke a tackle and outran the defense the rest of the way for a 75-yard touchdown run. The previous long was a was Josh Nesbitt pass to Demaryius Thomas in 2009, a play that covered 70 yards.

*Slow Finish – It took the Tigers until the fourth quarter to put another point on the board. Taking over at the 31, Lawrence hit Tee Higgins on a 21-yard middle strike to open the drive. Lawrence added an 8-yard run, and the Tigers opened the playbook. Lawrence handed off to the running back, who turned around and tossed the ball back to Lawrence on a flea-flicker. Lawrence launched the ball to Ross for a 38-yard gain to the Pitt two. Adam Choice finished the drive with a one-yard run and Clemson led 35-10 early in the fourth quarter.

STAT OF THE GAME: Clemson gave up 218 yards on the ground to the Panthers – a season-high for the Clemson defense. The previous record was 171 against Wake Forest.

UP NEXT: With the win Clemson locked up a spot in the College Football Playoff and will await its destiny, which will be announced Sunday at noon on ESPN.

Alabama – with a win over Georgia in the SEC Championship Game – will most likely be the No. 1 seed. Notre Dame should be included in the Playoff and the fourth and final spot will belong to either Oklahoma, Ohio State or Georgia.

Clemson will either play in the Orange Bowl in Miami, Florida in the Cotton Bowl in Dallas, Texas on December 29.