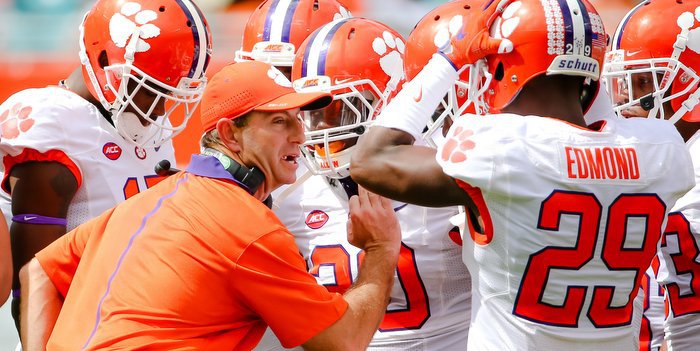 PLAYER OF THE GAME: There were too many players who contributed to Clemson’s win, so the player of the game goes to the team and the coaching staff for continuing to not listen to the doubters and showing up ready to play in a lackluster environment.

THE GOOD: Clemson. The offense came out clicking on all cylinders from the outset, scoring touchdowns on its first four possessions. The first team offense was pulled out of the in the third quarter after Clemson went up 45-0. The defense gave up 56 yards on the Hurricanes first possession before Jadar Johnson picked off Brad Kaaya in the redzone. However, the Canes only gained 141 yards over the course of the game.

THE BAD: There’s not a lot to say that was negative about Clemson’s performance Saturday afternoon, but there were two miscues. The fumbled punt in the fourth quarter by Ray-Ray McCloud and the missed extra point after Kelly Bryant’s 59-yard rushing touchdown. However, the Tigers did win the turnover battle after picking off Brad Kaaya and Malik Rosier passes.

THE UGLY: Miami. From start to finish, the Hurricanes were dominated offensively, defensively and on special teams by Clemson. The Miami defense gave up 567 yards to Clemson, while the offense only accounted for xx yards. The only bright spot on the day for the Hurricane fans who sat through the game was punter Justin Vogel, who booted a 73-yard punt to pin Clemson on the one-yard line in the second quarter, the Tigers only punt with Deshaun Watson at the helm.

SOUND SMART WITH YOUR FRIENDS: Miami has long been a storied program, but Clemson handed the Canes the worst loss in it’s program history. Until Saturday, the worst Miami loss was in 1944 when Texas A&M beat Miami by 56 points.

WHAT’S NEXT: Clemson continues its road trip with a 3:30 p.m. contest with N.C. State in Raleigh next Saturday.

Miami will look to rebound at Duke in a 7 p.m. game Saturday night.