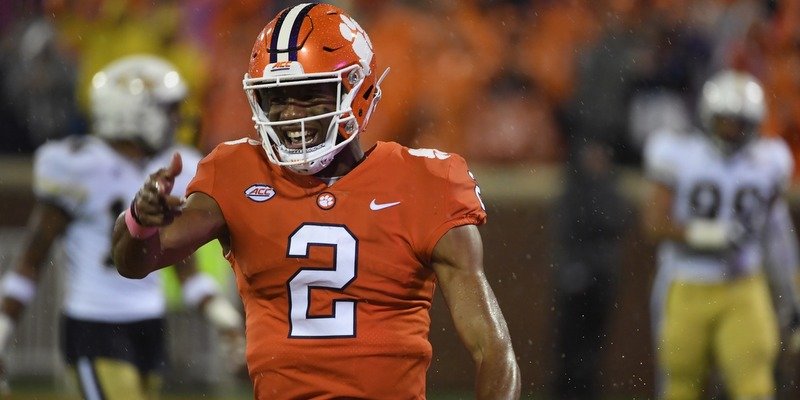 CLEMSON – Clemson took another step toward an ACC Atlantic Championship Saturday night with a 24-10 win over Georgia Tech in a rain-soaked Death Valley.

The Tigers held Georgia Tech to less than 200 rushing yards in winning their third consecutive game against their rival from Atlanta.

Below are quotes from several Clemson players and both head coaches.

“The fun’s in the winning. I’m really proud of our team. Everything is about how you respond. Good teams respond, and great teams respond like we did. I can’t tell you how proud of I am of our team and our staff. We were better tonight than we probably have been at any point this season.”

On bouncing back after a loss:

“We’re a very young football team. So, as a coach, you always have to reteach on how and why we do things. But they came out ready to go.”

On the defensive showing:

“Georgia Tech was third in the country with around 300-yard rushing per game coming into tonight, and we held them to under 200 yards. Our defense was awesome...guys did a great job.”

On the offensive performance:

“Offensively, we are at our best when we have good tempo and we’re attacking, and that was shown tonight. I’m really proud of Kelly Bryant. He came out firing from the first snap. We ran the ball effectively all night, getting over 200 yards rushing. We also did a great job of protecting our quarterback and gave up no sacks.”

“Alex Spence made a good kick, and Will Spiers had several great punts. The kicking coverage was solid all night, as well.”

On where Clemson stands at this point in the season:

“We’re right where we wanted to be coming into this season. It’s November, and we’re moving into the next phase of our journey. If we want something, we’re going to have to go and get it. And we’re one of the teams that have a chance, and that’s right where we wanted to be. I’m excited about having the opportunity to control our own destiny. It’s up to us to take advantage of it.”

“Clemson has a really good football team, and we didn’t play very well. That comes back to me. It starts with me. I thought we were ready to play, but clearly, we weren’t. We couldn’t win any one-on-one plays, any one-on-one blocks. We really struggled offensively. Defensively, we missed a ton of tackles and gave up some big plays to dig ourselves a hole. We actually played decently in the second half on defense, but we were so far behind it didn’t matter.”

“We were probably less than 20% on option reads. We missed a lot of reads. When we did get them right, it was like popcorn. Some of the stuff was just ridiculous. I can’t explain why we do some of the stuff we do here, but we do.”

“We got the thing going, then fumbled the ball. And, of course, like in years past...two plays, three plays later and it’s a touchdown and you’re digging out from behind.”

“[Clemson lines] up the same way as Wake Forest, but with different players. There is no magical elixir about how you play. Everyone lines up the same. It’s called beating blocks. We got rattled a little bit, especially in the first half. Clemson ran KirVonte Benson down once or twice because he was so concerned about ball security in the open field, he slowed down a bit. They’re fast on defense. We’re not the only people they do that to.”

“We had a hard time the few times we actually tried to throw the ball. But they didn’t. I don’t think you can blame it on the weather. If we had played in the clear, sure. We would’ve played with a quick field, but they would have, too.”

On the feeling of scoring his first touchdown:

“I just wanted to catch the ball. I’m more worried about that than anything. I lined up just how we had practiced it, and my biggest thing was catching the ball. It felt like a long time coming. I’m glad to get it.”

“It felt great. Sitting around doesn’t feel too good...we are on a schedule, and we don’t like to break it. A bye week is a break in the routine, which is good, but we want to get out there and keep playing. It was good to get back out there tonight.”

On looking back on the game film from tonight:

“We always look at the tape. I wish our coaches saw the rain and mud as an excuse, but we are always going to look at it. There will be things whether they are small or big that we need to continue to improve on.”

On bouncing back after a loss:

“It feels great to be out there again. Especially after that Syracuse game, everyone had a bad taste in their mouth. We just wanted to show who we are and that every team makes mistakes, but great teams come out of it and make the most out of the situation.”

On the offense coming out loose tonight:

“We are not focused on the margin of error we have left in the season. We focus on us and we feel like going out there and completing plays like we do in practice will make us the best that we can be.”

On the attitude of practice following a loss:

“We definitely went back to square one. We had to refocus and really hone in on the little things. The little things are what get the job done. The fun is in the winning, and sometimes we take that for granted. After that loss, we got back to reality.”

On the difficulty of the last two weeks:

“It’s hard. We don’t lose a lot..to go up there and lose and have two weeks to sit around and think about it, but we needed it. I think that we’re definitely better. We came out here and played one of our best games of the year.”

“I think it comes from how we prepare for them. We prepare great each year whenever we play them. Our coaches do a good job with us...great planning to go out there and play plays and stop their offense.”

On playing in the rain:

“It was a blast. You could see it on everybody’s faces. It was a great time.”

On what he learned from Dorian O’Daniel and Denzel Johnson on facing Georgia Tech:

"I got to hear a lot about the little intricacies of their offense and how they dealt with it and what I could do, so they helped me a lot.”

On the confidence going into NC State after a win like this:

“I can say it keeps you going, and having this win underneath our belt after a loss like that really brings our confidence up.”