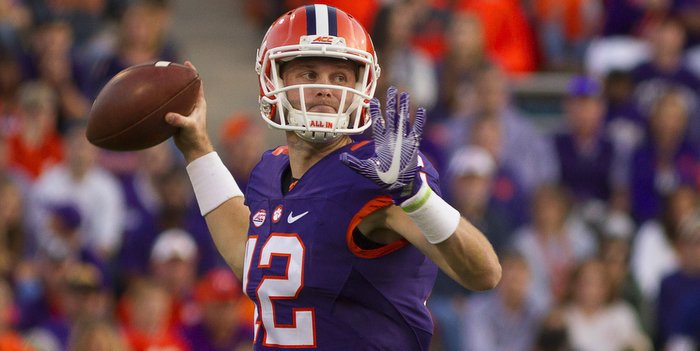 CLEMSON – Offensive coordinator Tony Elliott smiled when he was asked after Saturday’s win over Syracuse if the coaching staff could appeal to the NCAA for an extra year of eligibility for senior quarterback Nick Schuessler.

The Loganville (GA) Grayson native replaced starter Deshaun Watson late in the first half of the 54-0 rout of the Orange and the offense didn’t miss a beat – Schuessler completed 11-of-17 passes for 177 yards and two touchdowns, an effort that didn’t go unnoticed by head coach Dabo Swinney.

“When Deshaun (Watson) got banged up, we felt we had good control of the game and he was ready to come back in the second half, but (Nick) Schuessler did a great job stepping up today,” Swinney said. “He set a great example for his teammates. It’s a hard to continue to have to prepare each and every week like you’re the starter. It’s a hard thing to do, but that’s what it’s all about. I’m so proud of Nick for going in there and making some great throws. We kept on clicking and it was an outstanding win.”

Schuessler says he’s spent too much of his collegiate career watching the game to worry about impressing the coaches – he just wants to play.

“I try not to look at it that way. I've spent too much time standing on the sidelines. I've been waiting for my opportunity,” Schuessler said. “I feel like I was able to go out there tonight and just cut it loose and that's what I was proud about the way I played. I felt so comfortable being out there. It helps having guys like Mike Williams and Deon Cain and Jordan Leggett. The people that we have out there are the best in the nation. I feel like I have a good grasp on things.”

Elliott smiled when asked about an extra year for Schuessler.

“I'm not surprised. We see that in practice and we have a lot of confidence. Coming into fall camp, we knew this was going to be a big year for him, and he's been showing that since fall camp. I'm really happy that he had an opportunity to go out there and show what he's capable of.”

Elliott said Schuessler has been the consummate team player this season.

“It's a testament to him. He's driving to Greenville every day to take his classes and he's coming back for practices. He's just been dialed in,” he said. “That's what we talk about within our program because that's what is going to determine how successful he's going to be going forward - the attitude, characteristics, and qualities that you create between the ages of 18 and 22. I'm very, very proud of his play, but I'm more proud how he's carried himself off of his field. What you're also seeing is that he's a mentor to the younger quarterbacks.”

Schuessler said he was pleased with his performance.

“Especially, just standing on the sideline and having to go out there cold turkey, it was good. It was good for my confidence to get out there and hit Tay (Artavis Scott) in the endzone,” he said. “It was easy for me to get things rolling. When Deshaun went down, everybody was kind of holding their breath, so for me to go in there and get a quick touchdown right off the bat helped to kind of ease a little bit of that. I know they have confidence in me and I just had to go out there and prove to them that I could do it. That's what was going through my mind.”

Schuessler finished by saying he was able to play so well because of his preparation, something he’s learned from Watson.

“The preparation. We all take so much pride in that even if you aren't the guy, preparing like you're the starter,” he said. “I think learning from Deshuan who is obviously a Heisman candidate and being able to go back and forth with him - what does he see, what does he think I see, what does Kelly see, what do the coaches see - everybody from top to bottom was prepared to go whether their number was called or not. Whether I was going to go out there for three plays or thirty plays, I was prepared for my opportunity.”