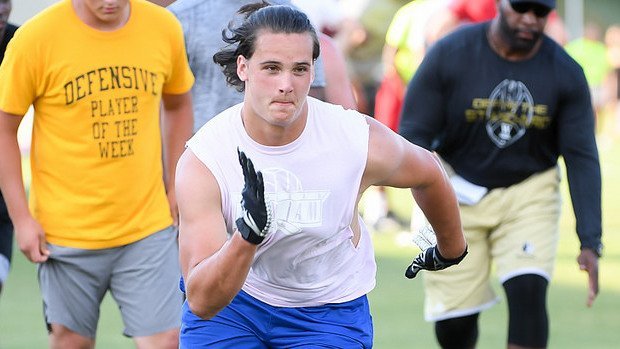 Cooper Dawson has had quite a week.

Dawson (6-5, 245), a 2019 2-star out of Hanahan (SC), was offered by Clemson head coach Dabo Swinney and offensive coordinator Tony Elliott Wednesday evening. Clemson extended the offer as an offensive tackle.

Dawson worked out at defensive end the first day of the Swinney Camp but suffered an ACL injury during Swinney Ball that evening. He says that results of his MRI results are expected Friday morning.

“Coach Elliott called me and told me that Coach Dabo Swinney wanted to talk to me,” Dawson told TigerNet. “I was injured during the first night of the three-day session at Clemson. My mom wanted to come to pick me up that night, but I told her I wanted to stay and learn as much as I could. Coach Elliott and Coach Swinney talked to me throughout the camp. Coach Swinney ended up talking to me and he told me that he liked the motor that I showed on the first session and that I was the kind of player that should be at Clemson, so he ended up offering me over the phone with Coach Elliott.

The injury happened while he was leaping to catch a pass.

“I was actually jumping up to catch a ball and before I ever made it off the ground, something popped in the back of my leg. It was actually during the middle of a Swinney Ball game,” he said. “We were up by a touchdown or two and the other team was saying, ‘Get him off the field. We’ve got a game to play.’ I told the trainer to get me off the field so they would quit complaining. Our Swinney Ball team ended up coming in fourth, so we did pretty good even without me.”

Despite the Clemson offer, Dawson he won’t rush into making a decision. Why? He still would like to play defense.

“I’m not looking to jump into a decision so soon. Coach Elliott - they want me as a Clemson Tiger, but he’s also told me that every door God opens you don’t have take or walk through,” Dawson said. “He knows that I love the defensive position, but I should also consider the offensive one. I think I’ve got seven offers for defensive line/defensive end/defensive tackle and three for offense. I think he’s going to respect whatever decision I end up making.

“Coach Elliott told me that God doesn’t make mistakes and that’s something that I’ve been living by recently.”