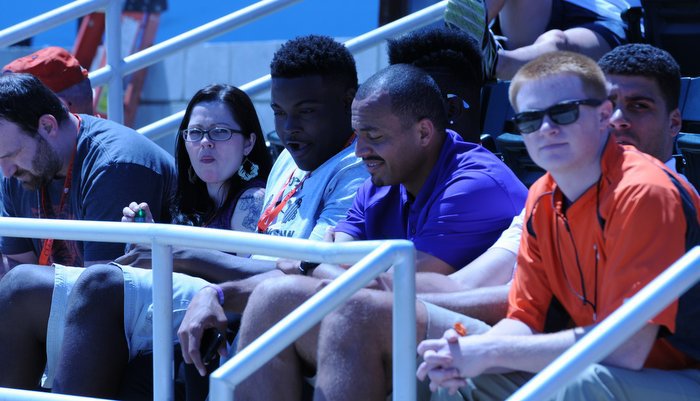 The 4-star North Charleston (SC) Fort Dorchester offensive lineman visited Clemson Saturday and left with a good grasp of what the Tigers have to offer, but realized that there's still more he needs to see before making a decision.

Simpson told TigerNet Sunday afternoon that the visit allowed him some one-on-one time with his future position coach as well as several of the offensive coaches.

"A friend wanted to visit and I was just like, 'sure.' I haven't been up there in a while, because I went on all of those other visits," Simpson told TigerNet after his most recent visit to Clemson. "It was kind of neat to see the atmosphere and things like that. I got to spend time with Coach (Robbie) Caldwell. I told him the other day that I wanted to spend more time with him. I spent time with Coach (Durrell) Barry. He's a trip. He graduated from Fort Dorchester, also. It's nice to have someone who understands where I'm coming from and things of that nature."

The 6-4, 288-pounder made the trip with teammate and 2018 athlete Dakereon Joyner, who is already receiving interest from Clemson.

"Kereon is like my little brother. Wherever he goes, that's where I want to be at," Simpson said. "He told me wherever I go, he's going. That's basically how it is. I really want to wait until he's got everything under control because he's only a freshman. Maybe next year he'll totally understand everything."

The visit cemented the Tigers place in Simpson's top-three along with South Carolina and Florida.

"Clemson, they are in my top three," he said. "That's just how it is. Clemson is very different in a lot of different aspects. The way they just put themselves out there on the market, I just love it. I don't know why."

However, he said there's plenty of homework left to be done before he makes a commitment.

"Clemson is a place that I can see myself being at, but that's the only college campus that I've been to multiple times besides South Carolina," he said. "South Carolina is also a good place and I wouldn't mind spending the next four years there, also. I've still got a lot of things to look over. I want to go back and visit South Carolina because I visited Clemson. I know I want to get to LSU."