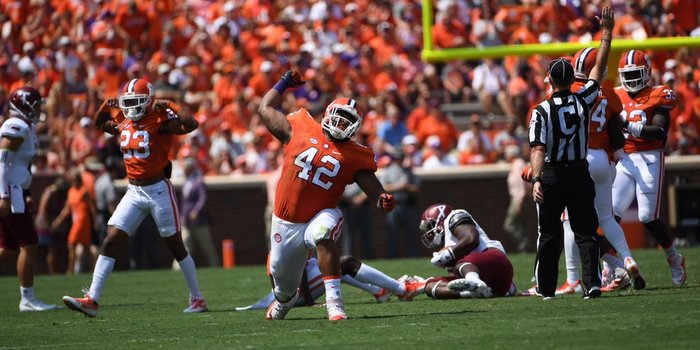 Christian Wilkins provided some of the cheers for Clemson fans Saturday

The season-opening win on the road at Auburn was excusable in its uncomfortability — Kevin Steele’s star-studded defense was a tough opening task for Deshaun Watson and company, while Gus Malzahn’s well-it-seems-wasteful-not-to-use-the-kitchen-sink,-too offense had Brent Venables scrambling for his favorite search engine during the week.

A six-point win had an air of “I’m just glad we got out of there alive.”

But the home opener against Troy on Saturday was supposed to have all of the danger and drama of a walk in the park for the Tigers. Instead on an afternoon where the 2016 College Football Playoff logo was unveiled along the base of the south upper deck, Dabo Swinney’s team bared little resemblance to the squad that left Oklahoma in its wake and nearly matched Alabama blow for blow nine months prior.

In a sense, Clemson has continued its playing style from last season’s magical run. Wins over N.C. State, Syracuse, South Carolina and North Carolina all had elements of “get in front and spend the entire game two steps ahead.” The only time the Tigers really racked up the style points was in that 58-0 demolition of Miami.

But while the 2015 Tigers always felt like they were in complete control, the 2016 Tigers have felt like teenagers who collectively decided that handlebars are for sissies.

And the most concerning element for Swinney and Clemson fans alike is that while last year’s team always felt like it had enough firepower to shoot its way out of any situation, this year’s offensive model seems to have taken on a much more pacifist approach.

The problems start with — but come far from ending with — the Heisman finalist quarterback. Watson just hasn’t had that same dynamism through eight quarters of 2016 that he showed time after time in 2015. His long throws have often sailed on him, and he hasn’t broken free for many third-down-saving runs.

That Watson not only played until the final kneeldown on Saturday but set also set a career high in passing attempts had more to do with his supporting cast, however. While he hasn’t always been on target with his throws, his receiving corps — so often the source of hyperbolic praise and expectations during the preseason — hasn’t exactly incentivized him to throw the ball on target. Offensive coordinators Tony Elliott and Jeff Scott went so far as to design a critical throw to a defensive tackle when the Tigers needed to kill off the game on Saturday.

Meanwhile, the offensive line hasn’t given Watson much time to throw nor Wayne Gallman much room to run. The loss of guard Eric Mac Lain and right tackle Joe Gore seems to have set the Tigers’ front-five back much further than anyone expected. And it’s not just that the new starters have failed to meet the standard set by their predecessors; the returning starters have struggled as well. Left tackle Mitch Hyatt — a revelation as a true freshman manning Watson’s blind side last season — was very publicly dressed down for his inopportune impersonation of a saloon door at one point against Troy.

Most of Clemson’s problems have centered around the offensive side of the ball and on special teams. Aside from some essentially garbage-time touchdowns and one breakdown on a long scoring run, the defense has picked up right where it left off. With most of the questions going into the season surrounding Venables’ unit, you have to wonder if the volume of motivation is a big reason why the defense has outperformed the offense thus far.

Justified in their belief or not, all of the Clemson players thrived off the doubt outside of the locker room in 2015. It wasn’t the only motivating factor, but it’s safe to say it was a large slice of the pie.

This season, the Tigers entered the year as preseason No. 2 in the nation, overwhelming ACC favorites despite having to go through Tallahassee in late October and a popular pick to not only return to the College Football Playoff but win it this time around. On the field, Clemson has played with very little doubt of its destiny, but instead of flexing its muscles and proving its worth, the team has simply just tried to go through the motions.

The mistakes the Tigers have made have been ones of lack of focus — Gallman running out of bounds to give Auburn one more chance and Ray-Ray McCloud not carrying the football across the goal line on a spectacular punt return the clearest examples. They’re like students who got all As last semester, so now they feel like they don’t have to study anymore.

The good news for Clemson is that all the first two games have cost the Tigers is a small amount of dignity. Fellow College Football Playoff hopefuls LSU, Oklahoma, Ole Miss, Notre Dame and TCU would love to have two bad wins through two weeks. Until the number to the right of the record dash no longer equals zero, your fate is still in your own hands. Clemson is 11 wins — ugly or otherwise — away from another crack at the College Football Playoff.

But the warning signs are there and the areas needed for improvement are apparent. The Tigers have one more dress rehearsal before winning ugly gets a whole lot harder.

With the specter of a midweek trip to the program’s personal house of horrors looming behind the next door, will we see another unmotivated performance out of the Tigers against South Carolina State next weekend?

Somehow, I rather doubt it.

*Robbie Tinsley is an award-winning columnist from a three-year stint with The Journal in Seneca, S.C., who now resides in Cambridge, Mass. Follow him on Twitter at @RTinMan13