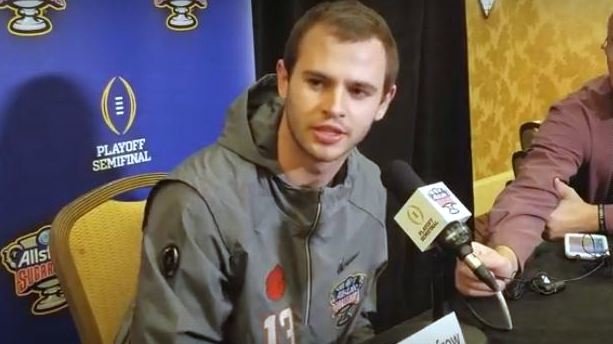 Renfrow talks to the media Friday

NEW ORLEANS, LA – You’ve seen Dabo Swinney when he gets mad. It’s epic. A sight to see. He doesn’t show that particular emotion often, but when he does, it’s best to get out of the way.

Unless you’re Hunter Renfrow. Then you stand and watch and laugh.

Clemson’s junior wide receiver met with the media Friday, and he was asked about Swinney and the head coach’s relationship with his players. According to Renfrow, nothing has changed since the Tigers won the national championship last January.

“No, and that's why we love him. He hasn't changed one bit,” Renfrow said. “He still will crawl us if we need to and will hold us accountable, but he also loves to have fun. Every year that I've been here, we've been consistent and we've done the same thing year in and year out - same schedule - and I think that's what it takes to be champions and to be successful is the level of consistency that he brings.”

Renfrow says Swinney’s personality has an impact on his players.

“I think it takes the pressure off of us with a guy like Coach Swinney. His consistency and his outlook on life,” Renfrow said. “A lot of people don't believe that he's the real deal but he really is. He's the same person every day. What you see on TV is what you see in the locker room, how you see him on a random Wednesday afternoon in the spring - just that same level of energy and the same level of love for his team and the people around him.

Renfrow talks to the media Friday "

However, Swinney is a coach and he has times when his anger shines through. It doesn’t matter if you’re a member of the media, one of his coaches or players or even his son. They all get the same treatment.

That was never more evident earlier this month.

“Along the lines of him treating everyone the same - he was at the College Football Hall of Fame for something in Atlanta and Will (Swinney) - one of my good friends and a freshman - and Clay (Swinney) went with him,” Renfrow said. “They just got back to Clemson and they're at the gas station and I get a call and Will is like, 'Hunter, my car's not starting and I just got my alternator fixed.' I told him I'd be there in a second. Me and my girlfriend roll up and I'm checking their car out and I've got some jumper cables.

“I was excited that he called me before he did his dad. We couldn't figure it out so his dad comes and he gets there and starts looking around and investigating. Evidently, Clay had pumped diesel into the car. It was funny because he was hot. He has all the money in the world and he can pay for it, but he stayed there for 30 minutes. He took them all the way to the other gas station and was lecturing them like he would a receiver on the bench who just dropped a pass and just pounding and pounding and pounding them for 30 minutes. I was sitting in the car and I didn't know if I should leave, but I was having too much fun just laughing at them. That was a good story.”