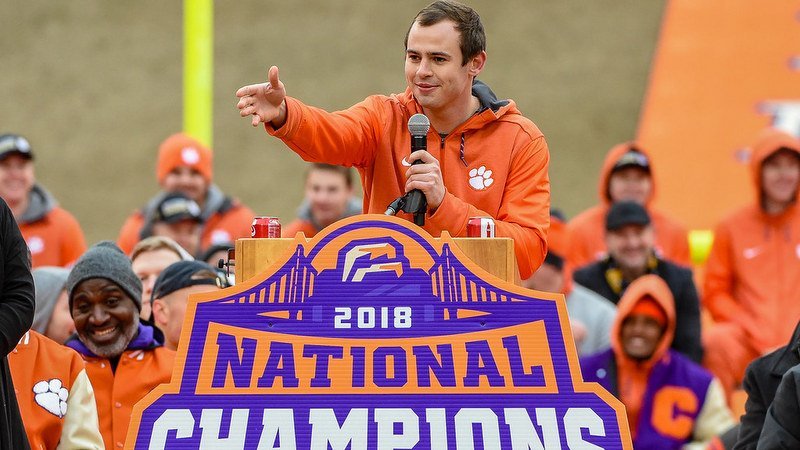 Hunter Renfrow says he is appreciative of his "closest friends"

CLEMSON – A running joke over the last few years has centered on the perceived longevity of Hunter Renfrow’s Clemson career, with many thinking that the former walk-on turned Oakland Raider played more than the allotted four years for the Tigers. If Renfrow has his way, however, Clemson fans will see him three or four more times a year in the orange and white.

Before he heads to Oakland, however, Renfrow wanted to send along a special message to Clemson fans.

“I am so appreciative. I feel like every time I go to Clemson I feel so loved and it feels like family,” Renfrow said. “I know it, so cliche to say that you are around 80,000 of your closest friends, but everywhere I walk there is so much mutual respect. Respect for me and I have so much respect for the fan base. It's not like Clemson everywhere. In talking to other people, I realize that Clemson really is unique and special. I am so excited to be able to say I am from Clemson and that I played for someone like Coach Swinney. As long as I play, I will be able to come back to Clemson and have that family atmosphere. I am so appreciative for it.”

Renfrow then laughed and said he wanted to see if Oakland would allow him the chance to play for the Tigers a few games next season.

The pick by the Raiders didn’t come as a complete surprise to Renfrow.

“I kind of made a list Saturday morning of the teams I thought could call, and Oakland was number one. I remember texting my good friend Sawyer after Pro Day and telling him I thought I was going to Oakland,” he said. “I don't know why. Just had that feeling all along. And then to see Clelin and Trayvon go there and as the day went along, and it got to the fifth start round it started to get to those teams that needed a slot (receiver) - Miami, Oakland, Green Bay, San Francisco- all of those teams that needed a slot and were interested were all coming along at the same time.

“And then I got a call from California, and I didn't know what team it was because all of the scouts had different area codes and different numbers and whenever I answered I recognized Coach Gruden's voice. I was pretty excited.”

Renfrow is excited for the chance to play for Gruden, especially after a conversation he had with Hall of Fame wide receiver Tim Brown. Once he plays for Gruden for a year, he wants to compare his two head coaches.

“He is someone I watched growing up. When I was in high school it was Gruden's Quarterback Camp, and I watched all of the draftees go through,” he said. “I talked to Tim Brown at the Super Bowl this year, and we sat down and did a little thing, and he was telling me that John Gruden made him a Hall of Famer and that he owed his career to him.

“So Gruden it making 10 years for $100 million and Coach Swinney is making 10 (years) for $93 million, and I've already to talked to Coach Swinney and told him, 'I will let you know after a year if Coach Gruden is worth seven million more dollars than you.'”

The chance to play with quarterback Derek Carr is also attractive.

“I really like Derek Carr a lot. I think I will mesh well with him. He is about some of the things that I am about,” Renfrow said. “I remember when he got his big contract a few years ago, and he was talking about how 'The more I make, the more I can give away.' It's about how you help people, and I am excited to play with a quarterback like that. And to be in a town like Oakland and send them out the right way and then move on to Las Vegas and have some success.” 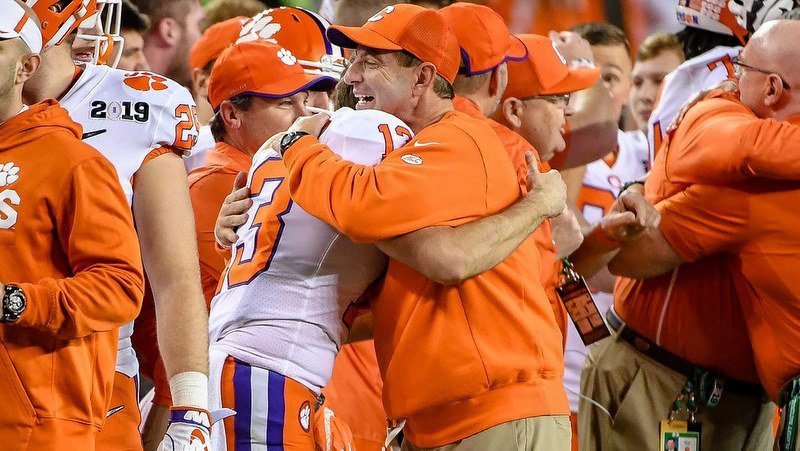 The Raiders went with the Clemson players after saying they want to change the culture in Oakland, something that Renfrow is happy to help do.

“I have always known that Oakland is all about the bad boys. It’s really cool, cause I was with Will Swinney and he was like, 'You are not a Raider. You don't look like a Raider, and you don't act like a Raider.' But I guess that is what they are trying to do,” he said. “All of the teams that I have been a part of and have been successful and won have been great guys first. I think if we can bring many of those people in it will help. Clemson has a lot of great guys, and I think we can help with that.”

The one-time walk-on turned draftee still has a chip on his shoulder.

“I always felt like I belonged, in my own mind. But there is a reason I wasn't drafted in the fourth (round) or third. It's because of my size and how people view me. And it means the world to me that Oakland took a chance,” Renfrow said. “I am the only guy they moved up for in the draft and picked, and that is what means a lot to me. I always feel like the underdog. I look down and my body is not where it should be, but I really do believe Coach Swinney when he says who you are is how you believe and how you process things. It's those little things that can overcome so much limitation physically.

“I am so ready to get started with the process and give it my all every single day. I feel like that is where people miss the boat - when they don't feel good they don't practice hard, and they don't prepare the way they should, and I am so looking forward to attacking those days when I don't feel good.”