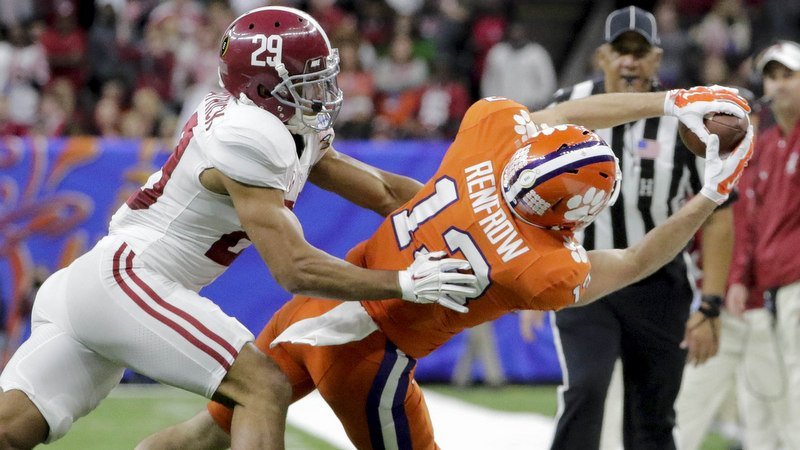 NEW ORLEANS, LA – Clemson got punched in the mouth and then knocked down by Alabama in Monday night’s Sugar Bowl. The fact that the Tigers didn’t get up and punch back is unacceptable to Hunter Renfrow, who said he and his teammates didn’t enter the game in the right frame of mind.

Renfrow stood at his locker in a disappointed Clemson locker room after the game and said he was disappointed in how he and his teammates responded to adversity in the loss to Alabama. Or, to put it a better way, failed to respond.

“Maybe not as much physical but more of an edge,” Renfrow said when he was asked if Alabama was more physical this year. “It was mostly the same guys. They just came out with a better mindset than we did and as a leader on the team, I can't let that happen.

“I think we prepared well. I think we had a great week of preparation. I think this team is made of the right stuff, and even though we didn't play well tonight we had a great season. I think from the opening kickoff they hit us in the mouth and we never really got back up and challenged them and that's a credit to them.”

“It is hard to look at that scoreboard. No one expected this,” Ferrell said. “We practiced well and we didn’t expect to get beat like that. That should never happen.”

Renfrow then said that Alabama’s defense was effective because Clemson was made one-dimensional.

“Nothing really caught me by surprise but they did play a lot of 2-man because they could because we were behind the chains a lot and it was third-and-long a lot,” he said. “They could play a lot more man. It's extremely tough. I think our defense has made a lot of teams one dimensional all year. We're not used to that as an offense and that's something we take pride in - throwing it and running it and whenever you take away the pass it makes it tough. We just have to do that much better on first and second down to get in front of the sticks.”

As a team leader, Renfrow said he has to take the blame but also wants to make sure his teammates realize they can make a positive out of the defeat.

Yes, and it starts with us. We had a big turnover coming out of halftime,” Renfrow said. “They had a big loss and so it starts with me. We've just got to get better. You just make them realize that it's not the end of the world. We'll be back. We've lost a national championship and came back and won one the next year. We'll just use it in the right motivation sense. You can use motivation in good times and bad. We didn't have to lose tonight to learn from it. We didn't necessarily want to go out there and lay an egg but we did and we just want to learn from it and not do it again next year.”