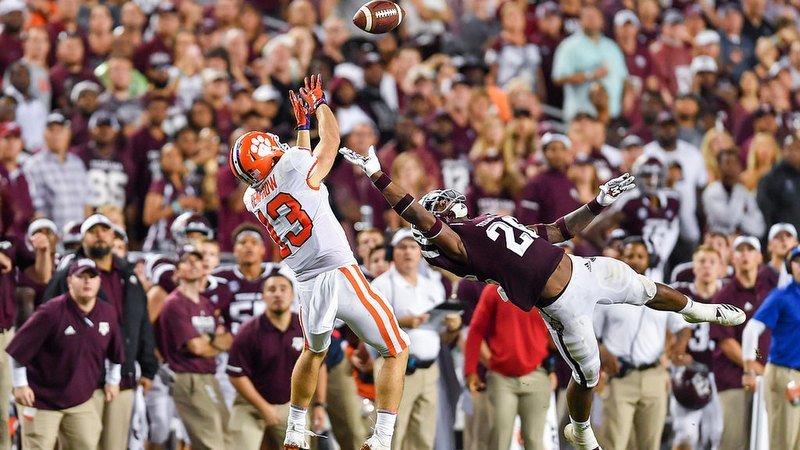 Clemson held off a late Aggie charge to win 28-26 at Kyle Field Saturday night, and according to senior Hunter Renfrow, it will pay off in the end.

“It’s big early in the season. Texas A&M is a great team. I think it’s really similar to that Auburn win two years ago when we went down to Auburn, kind of that same atmosphere. Auburn had a good year that year I think they won the bowl game. I think it will pay dividends down the road,” Renfrow said. “Just being in a close game in an environment like that, just know the battle test and know that we have been in those situations. We have proven that not last year’s team, but this year’s team can go win those games.”

The Tigers defeated the Aggies with the help of quarterback Kelly Bryant, who went 12-17 with 205 yards, one touchdown, and no interceptions. Kelly hit his career high-efficiency rating of 191.3 against Texas A&M Saturday night.

Bryant connected with Renfrow in the game for a 40-yard pass, extending Renfrow’s game streak with a reception to 30. Renfrow praised his teammate for his extravagant personality, and team-covering maturity.

“I think he knows who he is, and that’s where it starts. He doesn't waiver he doesn’t try and be anyone else, he’s Kelly Bryant. He doesn’t try and come out and practice and be anybody else, he’s just being himself. He’s not trying to be Deshaun or even Trevor, he just does what he does well. He knows what he does well, and he’s comfortable being who he is. I think that’s helped him and it’s a great thing that he has going for him,” Renfrow said.

With the on-going quarterback battle between senior Kelly Bryant and freshman Trevor Lawrence, Renfrow agrees that Kelly will always rise up in the battle.

“What I love about Kelly is every time he is faced with something he rises to the occasion. Last year it was who is going to be the quarterback, and he stepped up replacing Deshaun (Watson), and this year it's him and Trevor. It just seems like every time there are questions he doesn’t try and be anyone else, he’s himself,” Renfrow told TigerNet. “He plays to the best of his ability and that’s normally really well. That’s the thing that I’m most proud of to be his teammate, just because he’s able to be on that stage and treat it just like another day I think that level of maturity is something this team needs.”