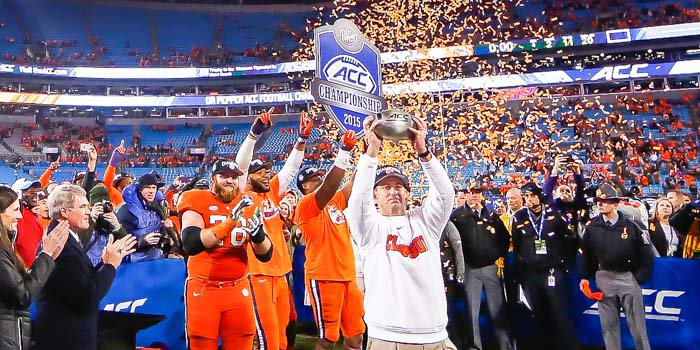 CLEMSON – The early signs pointed to success, and Dabo Swinney just had to stay the course.

Clemson’s head coach was named the Home Depot Coach of the Year Wednesday, a fitting honor for a man who has taken Clemson’s program to a national number one ranking and a spot in the College Football Playoffs. It’s also a sign that Swinney made the right decisions in the early days of his head coaching career.

Swinney is now a national media darling, a man known or his colorful phrases like “Bring Your Own Guts” and for promising pizza poll parties. Not even a mini-rant against his punter during Saturday night’s ACC Championship – caught on cameras for the world to see – can dim his luster. At times, his energy and his love for the Clemson program and his zest for life – which some people say makes him more of a cheerleader than a coach – make him seem bigger than life.

But he’s human. He bleeds.

“If you cut me open, I bleed. So, I’m certainly human,” Swinney said. “I’ve never lacked confidence or anything like that. I’m thankful that I have a strong faith, very thankful. The devil will attack in a lot of ways and doubt is one of them.”

Swinney is 74-26 in seven-plus years as Clemson's coach. He took over for Tommy Bowden in the middle of the 2008 season and has been with the team ever since. The Tigers have had five-straight double-digit win seasons and sophomore Clemson quarterback Deshaun Watson is one of three finalists for the Heisman Trophy, presented on Saturday.

It all started with humble beginnings, however, and a sleepless week leading up to his first game as interim head coach.

“All of a sudden, it hit me that we have to play on Saturday. It was the first time, I had parked in the head coach’s parking spot and I turned in to that parking spot and my lights hit the curb on the curb was the number 88. My number in college was 88.”

Swinney saw that as a sign that he was in the right place at the right time.

“It was almost like God was saying, ‘Hey, I’ve got your back. You’re right where I want you to be and don’t doubt that.’ And, I’ve never doubted it since,” he said. “I know that I’m here because the good Lord put me here for whatever reason. That doesn’t mean that you aren’t going to have challenges or adversity. because God is always trying to challenge you and make you better.

“But, as far as doubting myself, I’ve never been a doubter. I’ve been a believer my whole life. The only way to achieve is to believe and that’s why whenever we have a team meeting I walk in and I’ve got a ‘believe sign.’ I want this football team to believe that they can do anything that they set their heart to do.”

Swinney said he had one thought on his mind – survival.

Not only has he survived, he’s thrived, leading the Tigers to 13 wins for the first time in program history and a shot at the program’s first national title since 1981. Things have certainly changed, but for Swinney the biggest change isn’t the national talk shows or television appearances or coaching awards.

“Probably the biggest thing is that I get a little more sleep now than I did then because I never slept,” Swinney said. “I’ve grown immensely. It’s just like anything you do- the more experience you get, the better you get. You make mistakes, you grow from them. You have success, you grow from that. All of the success that we’ve had, the credit goes to the players and the staff.”