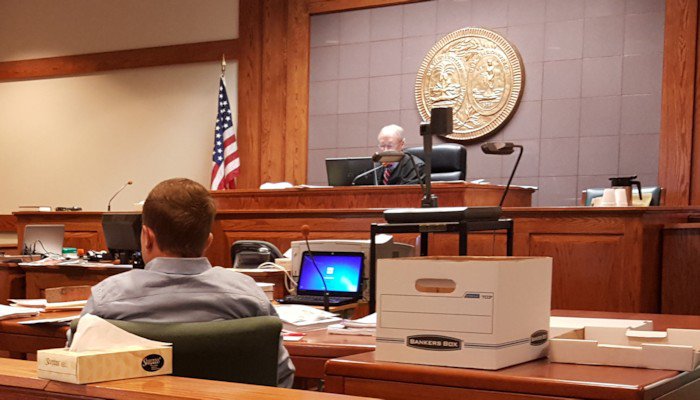 PICKENS – The state will rest its case against Howard’s Rock vandalism defendant Micah Rogers when both sides and the jury return from a lunch break this afternoon.

If Rogers is convicted, it might be Winn’s testimony that swung the pendulum, and TigerNet was on hand to cover the proceedings.

Rogers, 20, of Pisgah Forest (NC) has been charged with grand larceny and malicious injury to property valued at more than $10,000 for vandalizing Clemson’s Howard’s Rock. If convicted, Rogers faces up to ten years in prison on each charge. The vandalism took place on June 2, 2013 when Rogers allegedly broke the casing of the pedestal that houses Howard’s Rock and chipped off a large piece of the rock.

The trial began Monday with Solicitor Walt Wilkins and Assistant Solicitor Baker Cleveland serving as the state’s prosecutors. Leila Dunbar – an expert witness who as appraised memorabilia for the NFL Hall of Fame, Baseball Hall of Fame and New York Yankees Museum testified that if Howard’s Rock was broken into 1,344 pieces, each piece would sell for $100 each, totally $134,000.

Rogers’ family and A.J. Gainey – charged later with obstructing justice and conspiracy – sat on the first and third rows behind Rogers for the proceedings.

Rhodes’s testimony set the timeline for the damage and the arrest, and admitted the police department was struggling to find a credible lead until he was called by Rogers’ attorney – Frank Eppes – to meet with the police at the Pickens County Courthouse after he saw on TigerNet that his truck was of interest in the case after surveillance video had surfaced.

Both Rhodes and Sloan testified that Rogers was nervous and asked that a trash can be available during the interview in case he became sick during the process. Gainey was also interviewed that day, but it was an interview with Winn that made the police look at Rogers as the prime suspect.

Winn and his attorney were once again asked to meet with investigators two days later – on June 24th – and it was that testimony and the video that had been obtained that led to Rogers’ arrest.

SLED agents traveled to Rogers’ home in North Carolina and obtained consent to search and found hammers and chisels consistent with the family’s masonry business in the back of Rogers’ truck.

The state called Winn to the stand at 11:20, and Winn spent over an hour under direct and cross examination. His relationship with Rogers was established, and Winn then recounted the events of the night of the vandalism. Winn, Gainey and Rogers and Rogers’ family were camping at Lake Keowee when Rogers suggested the trio drive to Clemson to take pictures of the stadium and various points of interest on campus.

The three arrived outside the stadium, and Winn said while he stood in front of the gate that stands in front of Howard’s Rock Rogers scrambled over the fence. Winn testified that not long after he heard the sound of glass breaking and hammering coming from inside the stadium.

"My back was turned," Winn said. "I hear glass breaking and then hammering. It was loud. I was scared and nervous."

He then testified that he and Gainey went across the street to the Scroll of Honor and were later joined by Rogers. As the trio walked back to Rogers’ truck, Winn testified that Rogers stood in the middle of the road and danced and said, “I’ve got what I want. I got a piece of the rock.”

At that point, video was introduced that showed Rogers’ truck pull up to the stadium and movement near where Rogers was alleged to have climbed the fence, but the details weren’t clear enough for any observer to make a definite determination of who was who on the video. The state had pictures of the trio prior to the drive to Clemson that showed what each was wearing, including the khaki shorts worn by Rogers. The figure on the video that appeared to climb over the wall was wearing khaki shorts or pants.

The state announced prior to the lunch break and announced that when the jury returns from lunch they will rest their case and the defense will begin its case. TigerNet will be on hand for the proceedings and will have an update later this afternoon.

Howard’s Rock vandalism defendant Micah Rogers tells the judge moments ago that he has elected to not testify. pic.twitter.com/2EeLZFIj9A

Howard’s Rock vandalism defendant Micah Rogers bought a "Get your hands off my rock!" shirt the day after vandalism. pic.twitter.com/3pelGE2tE9

The man who says he was with Micah Rogers the night Howard's Rock was vandalized just took the stand @wyffnews4 pic.twitter.com/J4GjAOvH8g

Agent: man accused of vandalizing Howard's Rock is in the masonry business. Pic shown of tools in suspect's truck. pic.twitter.com/HirioVPFOv

Officer on stand: Micah Rogers was nervous when first interviewed on the vandalism of Howard's Rock pic.twitter.com/TIbScr4TCr