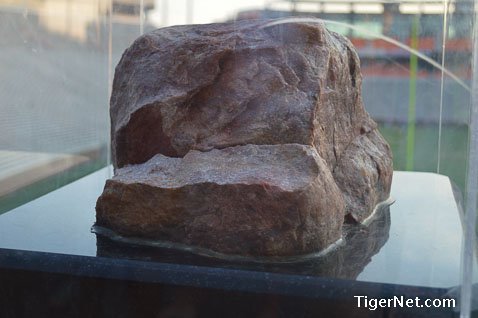 The long and winding road to trial in the vandalism case concerning Clemson’s iconic Howard’s Rock took another turn Wednesday when it was announced that one of three people charged in connection with the vandalism now faces upgraded charges that could bring a much stiffer penalty if he is convicted.

Micah Rogers, 20, was originally charged with malicious injury over $2,000 and trespass after being accused of damaging and carrying away a portion of Howard’s Rock on June 2, 2013. Michael J. Rogers, 46, of Pisgah Forest, and Alden James Gainey, 17, of Brevard, were also charged in connection to the incident. Michael Rogers and Gainey each face charges of felony counts of conspiracy and obstructing justice.

In the case of Micah Rogers, a Pickens County grand jury upgraded the charges to grand larceny and malicious injury to property, value over $10,000. The charges were formally served against Rogers in Pickens County on Wednesday. If Rogers is found guilty, he could be facing a 10-year prison sentence.

TigerNet reached out to Frank Eppes – the attorney for the Rogers’ family – and he explained the new charges.

A big question surrounding the case has centered on a potential trial date. With the filing of the additional charges, both parties might be closer to putting the case on the judicial docket.

“The case has taken a long time because the prosecution has been struggling with how to value the rock and partly because it is a complicated case,” Eppes said. “Right now, it's about how the law values a rock which is a chattel - or thing that can be easily replaced - when it has such an important sentimental and emotional value to so many people. Secondly, I think the issue of proving my client's guilt or innocence - and remember he's deemed innocent until proven guilty beyond a reasonable doubt - I think the case is a little more complicated than most people would believe based on the swiftness of the arrest and the information they have. My client has always maintained his innocence and the matter has been stressful for he and his family and we appreciate the vast majority of the Clemson community that have treated the matter of going to court with the seriousness it merits and allowed the process to go forward. At the same time, we wish everybody was like that.”

Eppes declined to give a timeframe on the trial.

“I really think the case has taken a long time because it does have some very unique and complex issues because Howard’s Rock has such a treasured place in the folklore of Clemson University and its football team," Eppes said. "The trial date is set by the Court and the State with an eye towards allowing the State and the Defense to have time to adequately prepare.”

Typically a case in Greenville County is concluded by the 18 month mark and the majority before two years and it that were to hold true, the case might go to trial at some point in the spring and almost certainly by the beginning of the 2015 football season.

In a case like this one, there isn't a lot of precedence but one could look at the case of Alabama fan Harvey Updyke, who poisoned the oak trees at Auburn's Toomers Corner. Updyke was charged with two counts of criminal mischief and two counts of desecrating a venerated object, among other charges. Updyke's attorney asked that the charges be reduced to misdemeanors because the state of Alabama "has explicitly set the value of an oak tree" at $20, which would be below the level for a felony.

Updyke pleaded guilty in March 2013 to the Class C felony of damaging animal or crop facilities in a deal that dropped additional charges of criminal mischief and desecration of a venerated object. Updyke served six months in prison, but along with his jail sentence he was also ordered by a judge to pay $800,000 in restitution to the school. The payments covered restoration and rescue efforts for the trees, court costs and legal fees.