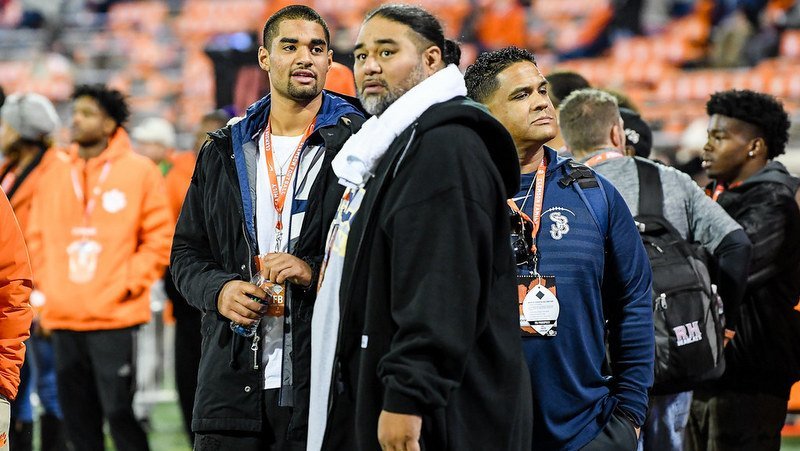 The addition of four recent 5-star commits has Clemson’s 2020 recruiting class currently sitting atop the team rankings and it doesn’t appear the Tigers will slow down anytime soon. What sets Clemson apart? As it turns out, it’s more than football.

The Tigers landed 5-star quarterback DJ Uiagalelei Sunday afternoon, continuing a recent run on 5-stars for head coach Dabo Swinney and his staff. Uiagalelei plays at one of the top high school programs in the state of California in St. John Bosco, and the coaches at Bosco have seen plenty of college coaches walk through their doors on the recruiting trail.

What sets Clemson apart? Bosco coach Terry Bullock has an answer, at least where Uiagalelei and Clemson are concerned.

“What set Clemson apart from everyone else has nothing to do with football. Everybody has a good program, the latest and greatest facilities and unicorns and this and that, but it's the culture,” Bullock said. “When you step on that campus at Clemson, there's an aura on that campus. I'm not a big Bible thumper - I was raised in a Catholic church and go to a Christian Church - but when you step on campus, you feel that presence of God just from the way the coaches the speak, the reference to scripture, the faith. Then to see all of the coaches and their wives are around and their kids are running around, it's a very family-oriented atmosphere. They're not hiding anything there.”

“When Clemson came out to visit DJ, they hadn't offered him yet because they weren't sure how serious he was,” Bullock said. “I think it's great what Coach Swinney does because they won't offer a kid until they come visit campus. Dabo's famous thing he says is, 'Hey, I want to see this family and put a little skin in the game,' and that's smart because half of these kids get offers from these schools and most of them aren't real. Then, they never go see the school so how could you take a school serious that you never visited.”

The Tigers offered Uiagaleli last June when he and Bullock visited Clemson for Swinney’s high school camp. Once the offer came across, Uiagalelei knew where he wanted to go.

“When we went out on the visit, it was almost like Streeter planned it like a romantic date,” Bullock said. “We're out rolling around, seeing the campus and then he takes us down to the lake and we walk out onto the boat dock. It was me, Coach Streeter, DJ, Coach King (our d-coordinator) and Jordan Sorrells. He said, 'Hey, do you like the lake and the water?' DJ was like, 'Yeah, I love it. It's nice down here,' and Coach Streeter said, 'Well, I thought this might be a nice place to come for me to offer you a scholarship.' I was like, 'Holy smokes, that's just happened!' That's how it all started, and Clemson was the last stop on a three-school visit. We had been at Alabama for two days. We had been at Georgia for half a day and then Clemson was our last stop.”

Once that stop was over, Bullock believes the Tigers held a lead they would never lose.

“We visited Auburn when they played Texas A&M. We had been to Oregon a few times,” he said. “We saw Oregon play Stanford and Arizona. I really think it was a two-dog race the whole time. Then, after we visited Clemson, it was a one-dog race. It was Clemson's quarterback to lose.”

Bullock admits he grew up a fan of the Oregon Ducks but says he has learned to appreciate how the Clemson coaching staff goes about its business.

“I love those guys. I know that DJ will be just fine there. Coach Streeter, I talk to him on a weekly basis. I talk to Tony Elliott quite often,” Bullock said. “I check in with Coach Swinney at least once a month. We FaceTime each other. They're on it. They're sincere. They put all of their eggs in one basket because they didn't recruit another quarterback besides DJ. This was a big deal. If they would've missed on DJ then they would've had to go look for some other guys. They're very honest. None of them took the used car salesman approach. None of them were pushy. They were very open.

“The fact that they came out visited numerous times. When Coach Streeter and Coach Elliott were out here last week, I met them in Manhattan Beach on a Sunday and we went to dinner down by the Manhattan Beach Pier. It was pretty cool. They were on the West Coast and this is where we grew up. I know you don't get to the sunset on the Pacific Ocean very often, so it was pretty cool. We saw each other before anyone else when they got into town. Last time Tony Elliott was here, we went out to breakfast. It was myself, Coach Elliott and Keith Hayward - the safeties coach at Oregon. We all had breakfast together.”