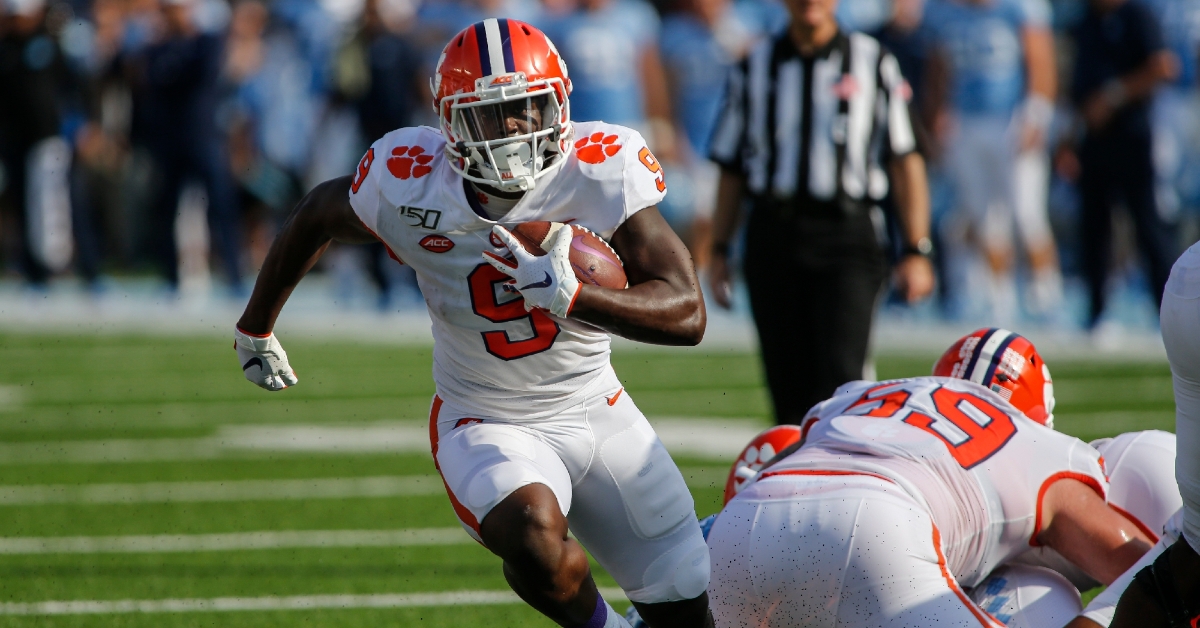 Etienne looks for running room in the first half. (USA TODAY Sports-Neil Redmond)

Many defenses over the last few seasons have gone into games against Clemson wanting to stack the box and stop the Clemson run game with Travis Etienne and take their chances with the passing game. Not North Carolina.

The strategy worked as the Tigers put up just 331 total yards, with only 125 coming on the ground.

“I think the main thing was I think they were just really scary outside at receiver,” Bateman said earlier this week. “And I wanted to give them as few shots on goal as I could outside against one-high defense. People that have played them with one-high defense have done okay for awhile, but then all of a sudden you turn around and it's 42 points, because they've given up three huge plays. So we felt like we had to disguise that. And then I thought we did a really good job with our front. Tim Cross, I thought our front played really well in the run game, two-gapping some stuff. Trying to take up two gaps with one guy. Some D-line twists, and some D-line stunts to try and take some run gaps away.

“And try to get them to run the ball, and then handle our run box with less defenders. I thought we did a good job with that.”

Clemson didn’t force the issue on the ground – running back Travis Etienne totaled just 14 carries for 67 yards and backup Lyn-J Dixon had just four carries for 20 yards. Quarterback Trevor Lawrence ran it 11 times for 45 yards, most of those on the read option.

With the Tigers not finding a lot of success on early downs the Heels brought pressure on passing downs, forcing Clemson to use the backs in pass protection.

“I think we did a good job of getting our linebackers on the running back in one-on-one pass protection situations,” Bateman said. “I didn't think ... The people that have blitzed them a bunch, you get chewed up. I think he's so big, and he's so tall, he sees it coming. So he sees it coming off the edge. And what happens is then it’s just getting it out to (Justyn) Ross and (Tee) Higgins, and you're in trouble. So our thing was to try to show, and then try to get running backs on linebackers isolated.

“And I think early on, I thought the first couple of third downs was really good. And then you give them credit, they did some stuff with different protections, but we were trying to get (Chazz) Surratt on the back as much as we could. Because the other thing, that was right up the middle. And I felt like any twist, anything off the edge, he just saw it and got rid of it.”