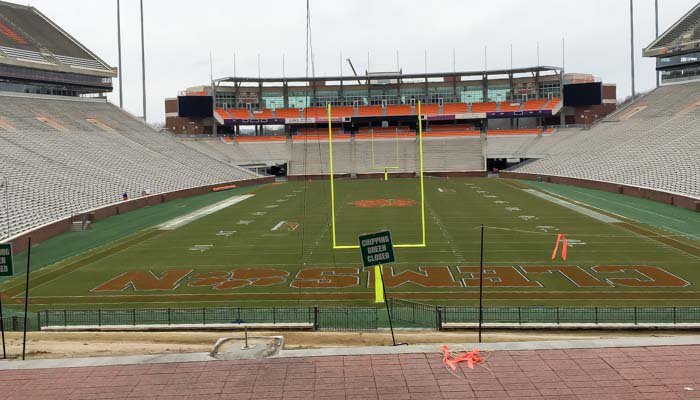 Howard's Rock was removed from Death Valley on Wednesday after someone damaged its pedestal.

CLEMSON – Howard’s Rock is more than just a stone - it’s a piece of history that years ago gave an identity to a school and a football program trying to make its way in the land of big boy, southern football. Since the rock was first placed atop the hill, generations of Clemson fans, football players and coaches and even the casual tourist have taken the time to touch it and have a picture or two taken with the rock. Countless memories have been made along the way.

The news broke early Wednesday that yet another vandal had taken a crack at the iconic stone, a stone that was brought from California’s Death Valley and given to former head coach Frank Howard. The rock served as a doorstop before Howard told booster Gene Willimon to “Do something with it but get it out of my office.” Willimon got the idea to use the stone as motivation for the football team. It’s been more than motivation in the years since that time, it’s been an integral part of the fabric of Clemson football.

Following the Wednesday vandalism, the rock was removed from its place atop the hill, leaving an empty spot on the hill and in the hearts of true Clemson fans. As one fan told me shortly after he saw the photo of the empty spot at the top of the hill, “that’s sickening to see.” The picture of Death Valley with no Howard's Rock was disturbing. It feels like the enemy has triumphed.

In many ways, Howard’s Rock IS Clemson. And now, it’s time to protect it.

I’ve heard a lot of people comment on the best way to protect the rock – new cameras, armed guards and those who have a sense of humor have even suggested putting a real Tiger in charge of protection. The reality is that the fact that we are having to even talk about this is sad. People who took their pictures with the rock in the 70’s introduced their children to it in the 80’s and 90’s and now are having their grandchildren see it on game day.

Last year, I was doing a story about the Scroll of Honor and met a couple who were driving from Ohio to Florida, but saw the sign for Clemson and had to stop off and see the rock. I’ve seen members of the Wounded Warrior Project touch the rock. I’ve seen people gather near and around it on game day.

The rock’s value? Ten bucks if you just took a similar rock and tried to sell it on the roadside out on California. Maybe not even that much. For Clemson fans, however, the rock is priceless. You can’t put a monetary value on it because of the emotional attachment it brings. And as long as the rock is out in public during the night and when the campus is mostly empty, there are the kooks and the idiots who are going to do their best to damage it. Camera systems and alarm systems are great at finding perpetrators after the fact, but the rock needs to be protected and kept from harm.

The university is spending millions on athletic upgrades, but now is the time to invest in protecting one of its greatest assets. If that means a replica rock needs to stand atop the hill, then so be it. Put the rock in the WestZone 358 days a year. Let recruits see and learn its history. Let it take on even more of a legend. 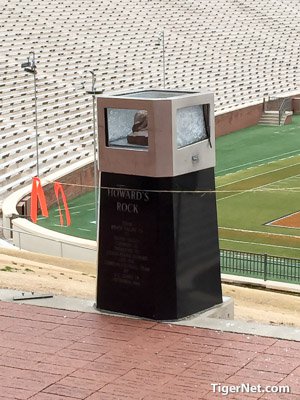 The damage to the pedestal for Howard's Rock

And here is my idea – on those other seven days which are Clemson home football game days - take the rock back to its former home and make it into a tradition much like TigerWalk. Have cadets or members of the ROTC “walk” the rock from the WestZone to its rightful place atop the hill. Make sure it’s protected along the way, but something that Howard once said about the rock comes to mind. Use the band. Use drums. But have an honor guard as the rock makes the trek around Memorial Stadium.

Howard told his football team, “Give me 110 percent or keep your filthy hands off of my rock." The team began routinely rubbing the rock in 1967, and have been doing so ever since.

If fans who will only give “110 percent” during the game want to touch the rock on its journey, so be it. But make it an honor to "protect" the rock on the journey.

But it’s time the rock earns a new, more respected place in Clemson lore all while being protected for the priceless artifact it is.

And when the rock – forged in the heat of Death Valley and brought cross-country so many years ago – finally makes it back to its rightful spot under the scoreboard and on top of the hill, Memorial Stadium is once again transformed into Clemson’s Death Valley.

Dear vandals: Keep your filthy hands off of our rock. Dear school administrators: Please give 110 percent and more to protect our rock.

*NOTE: Have an idea for protecting the rock? Comment under the story.