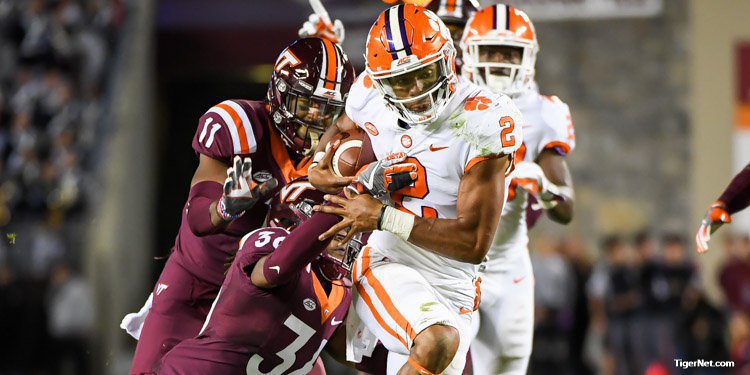 Bryant runs for tough yards against the Hokies

BLACKSBURG, VA – Much of the buzz surrounding Clemson’s 31-17 victory over Virginia Tech Saturday night surrounds the play of Clemson’s ferocious defense, but players and coaches on both teams gave much of the credit to junior quarterback Kelly Bryant.

Bryant wasn’t perfect – there were overthrows and missed reads – but he made enough plays and kept the Virginia Tech defense off balance with his legs to keep the Tigers in front.

“He was the difference in the football game when it’s all said and done,” Foster said. “Made a couple of nice throws and a couple of nice runs. It was an impressive game. I was impressed by his athletic ability all the way around.”

Clemson head coach Dabo Swinney shook his head and smiled when a reporter asked if he was surprised by what Bryant has been able to accomplish in leading Clemson to a 5-0 start.

"He's not a freshman, he's not a new player," Swinney said. "He's been in these environments. He's watched Deshaun. He's had a front-row seat for Deshaun the last few years."

"I thought he was awesome. Every week we get the next question about going on the road in a hostile environment and nobody really wanted to give him any credit after Louisville,” Scott said. “Before Louisville, it was going to be the biggest atmosphere and all that, then he went in and got it done and this week it was the same type of question. Kelly just doesn't look like a first-year starter. He looks like a guy who's been playing football for a long time and just led the team and did a great job running the ball and made good decisions. Just can't be more proud of him as a leader in that situation. That's a tough environment, it's one of the best game environments in the ACC. Loud and their crowd was in it and I didn't really see any effect on him or the other guys."

Scott agreed with Swinney, saying that Bryant learned from watching the best quarterback in program history.

"He's just very confident and I think he's confident because of his preparation,” Scott said. “He works extremely hard and it's not like he's a freshman. He's been in some big environments and some big games and been around Deshaun and there's never any moment where it feels like the environment is too big. He did a great job and stayed focused and led our team down on that first drive and was impressive."

Tony Elliott said Kelly was the x-factor against Foster’s defense.

"We had an opportunity to take some shots and there in the first half we were close on a couple plays. We overthrow a touchdown to Deon (Cain) and we had Tee Higgins an opportunity to get behind a guy all because of the time the offensive line gave us,” Elliott said. “We knew it was going to be tough sledding running the ball especially in this environment at home and all the movement and you saw the shifts early on where Bud was moving guys before the snap and that's tough on the center when he's got his head down so we knew it was going to be tough sledding and that's why Kelly was such an x-factor and just gave us an extra hat and show pass and just take off and run."